Reports: Office building in the works for current home of P.C. Richard on 14th Street 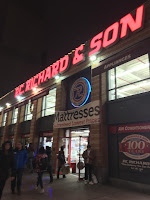 In November 2015, the city's Economic Development Corp. (EDC) began accepting proposals to redevelop the city-owned site that P.C. Richard (and Son!) has leased the past 19 years.

And now, a short 13 months later, the de Blasio administration has selected RAL Development Services, a real-estate firm, to develop the site, as Politico first reported.

According to Politico, Civic Hall — "a tech-focused work and event space" — will anchor the space.

In a public notice, EDC described it as "an opportunity to create an iconic commercial development that drives inclusive economic growth through the diversification of the city's economy, the retooling of NYC's traditional anchor industries and/or support for both start-ups and early stage growing companies to scale up while remaining in the city."

As The Real Deal reported, RAL Development Services is "one of the companies behind a controversial residential project in Brooklyn Bridge Park."

Anyway, it's not exactly clear what else is in store for the two-level space ... and if demolition is in the future. NY Yimby reported this about the property: "The 15,450-square-foot site ... can accommodate up to 92,700 square feet of commercial space. An additional 46,350 square feet of space could be built as residential or community facility space."

There aren't any demotion permits on file yet.

As for P.C. Richard and family, its lease expired back in February. Despite media reports to the contrary, this P.C. Richard remains open, having been relegated to mattress sales. And maybe some appliances.
Posted by Grieve at 3:48 PM

92,000 sq. ft. of office space ... how many fratty "master of the world" jerks will that allow to work there? That'll be the final nail in the neighborhood's coffin.

One of the things I've always loved about this area is its relative "human scale" with so many low-rise buildings. But this move will push it that much further into being just be one more glass-faced high-rise district, with nothing to distinguish it from all the others in Manhattan. And if you're not 20-something, or not making a zillion bucks a year, the message is "go away b/c you don't belong here. We're high-tech and you are a fossil".

whatever happened to the mayor's "low income housing" plan???

The building behind PC Richard is low income housing

@-----m - Low income people don't have millions of dollars to give him in campaign contributions; that's what happened to deBlahBlahBlahsio's low income housing plan.

This fucking guy de Blasio...voter turnout set a record low in 2013 with only 24% of registered voters showing up. Too late for complaining now.

sounds like another WeWork residence, whom just happen to be big donors to the corrupt mayor's temporary city hall CONY superpac/(c) (1) 503 slush fund. (I personally think WeWork is a cult.)

@ gojira- the low income housing plan is to place working poor and middle class people in hotels after they get priced out of apartments and their long time neighborhoods.

The city is still relying on these predatory developers the same as they are relying on cluster site slumlords to shelter the homeless. Honest graft has become city policy.

Just another step towards our Blade Runner future by the jackbooted capitalists. Where is dialectical materialism when you need it? I used to ask where are our politicians. But by now I know, we all know where they are - not on the side of the angels...

I was going to comment to note my outrage but you guys have it covered.

P.S. almost every appliance I have bought from air conditioners to toasters to blenders to alarm clocks came from this store.