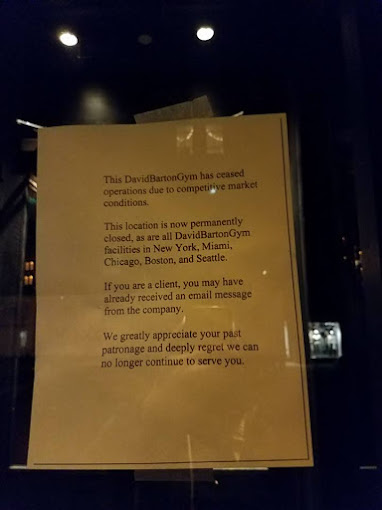 Gymgoers heading over to the David Barton Gym on Astor Place (and other locations) were surprised/shocked/pissed to learn that the facility is permanently closed.

The sign for gymgoers notes that they "ceased operations due to competitive market conditions."

Gym members received an email in the middle of the night, per one EVG reader: 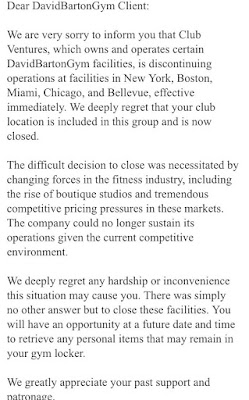 An EVG reader shared this email that sent to members of Cyc Fitness, which had a studio inside the Astor Place David Barton... 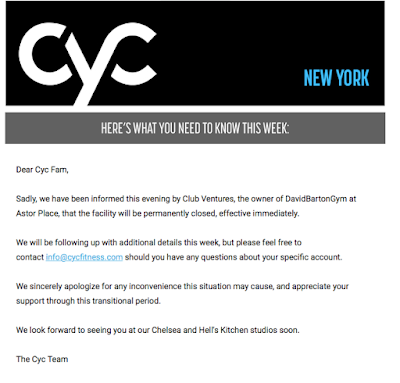 David Barton, who opened the clubs in the early 1990s, reportedly stepped away from the business in 2013.

The Astor Place location opened in 2009. The space was previously a Barnes & Noble.

David Barton Gyms have yet to make any official announcement about the closure, per NewNowNext.

“DavidBartonGym has discontinued operations at its locations in New York, Boston, Miami, Chicago, and Bellevue, Wash., effective immediately. All affected employees and clients are being notified.

However, all DavidBartonGym facilities in Los Angeles and Las Vegas and the Island Club & Spa in Honolulu will remain open and operating as usual. These locations are owned by a separate legal entity, Meridian Sports Club, LLC, and are in markets that are more favorable to the company’s business model. Clients and staff will see no changes.

The company deeply regrets this final action, but due to severe competitive pressures, particularly in New York, it has become impossible for these locations to continue. DavidBartonGym greatly appreciates the past patronage of its clients and support of its staff and training professionals.”

Reps for rival gyms were outside the Astor Place location today offering deals to now-former Dave Baron members, per DNAinfo.

The Post reports that the closure left 369 gym employees without jobs in the city.
Posted by Grieve at 10:18 AM

I wonder if they will find a home for all that fugly furniture.

They forgot to mention that people don't want to exercise in dark, pretentious cave-like atmosphere where everyone is focussed on how great they look in the mirrors. They just want a good workout.

Maybe I'm old, but I just don't get this "concept gym" thing. Why does the place have to look like a dance club - just go f**king work out!

Bring back Barnes and Noble!

While I can't believe I'm endorsing a chain store, but I agree: bring back Barnes and Nobles.

This was basically just a pickup spot where guys went to pose with their tattoos and muscles and pick up other guys. Why would anyone pay for that when you have bars n Chelsea and Hells Kitchen that let you do the same thing for free?

Keep it classy David Barton, usng the bankruptcy of your old gym to promote your new gym. So you dont know what to do> How about some refunds? And jobs for your former employees who are now unemployed?

The David Barton Gym Bankruptcy Fiasco, Via the Daily Mail:

"Barton stepped away however in 2013 and sold the rights to his name, but has proven that he still has the magic touch, opening a new gym TMPL in New York City earlier this year.

'Companies do fine without their founders all the time,' said Barton at the time."

Ha! But not this time!

"Barton said of the closing: 'I'm sad to hear that David Barton Gym is closing down this way. It's been several years since I've been part of the company, but I thoroughly enjoyed building the business and appreciate the efforts of everyone who made DBG what it was.
'People are calling and showing up at my new gym, TMPL. I'm not quite sure what to do for everyone, but it's the holidays, come in and work out on me for now. We'll figure something out in 2017.'

What a jerk. Bring back Barnes and Noble, what they did to that space is a disgrace.

And just who pockets the remaining money paid for yearly memberships? And yes, BRING BACK BARNES & NOBLE .

It looked like a creepy club from the outside and gave the impression once
you went in, you might not make it out.
Besides that, it was expensive.

This sounds odd, while they may have made a decision to close,
why so chop-chop and sudden, like an emergency and not
give people proper notice.
Sounds like a Dolphin Fitness move.

Maybe Barnes and Noble will come back !

Why not bring back Conran's?

Go ahead and be mean and make fun of the gym for being different. You sound real tough from your laptop with cheetos on your gut. This gym provided jobs and a space for people to get away. How about you think about all the people that lost their jobs or the members that are losing their money. You are just a bunch of miserable pricks that want something to complain about.

I was a member from 2010 to 2013. I ultimately left because of its attitude and snobbery from staff and members. It is a gym after all. Nothing more. There were a lot of celebrities there, which was kind of cool at times. But there was this elitist vibe from many, which left me feeing like shit. Even my fellow gay men, who were fully grown adults, often treated me like I was in high school. I wasn't part of their posse or pack and the simply weren't going to look at or acknowledge me because I wasn't has hot or ripped as them. I just came in and worked out, but often the machines were taken up and left all wet from sweat. The prices went up. The locker room was full of body and foot odor. The carpets were soiled. My expensive watch was stolen. The steam room was practically a bath house. They eliminated the spin classes and yoga. And the fees were raised to 140 a month. I had to have a notarized letter from my doctor to terminate my contract with DB, which then took an additional 90 days to cease. This place was a fucking mess. Good riddance.

Wasn't this the gym that promised you would "look better naked"?

I was a DB Astor Place member from early 2015 into the middle of this year, when I switched to NY H&RC. While I was at DB some trainers decamped to TMPL, when that opened. So David Barton *was* 'giving them jobs". Maybe they sensed that DB was unsustainable?

369 people out of a job just days before Christmas. That sucks, but I am not surprised. I was a member of the gym too for many years. Management didn't give a shit about it's members. They only cared about taking your money, which leaves me to wonder where all of the money went? There was a complete lack of regard and respect pertaining to customer service and hospitality.

I think the overall problem with DBG was excess. There were too many locations and the upkeep was enormous. So many believe the more locations there are, the more income it will generate. But there is such an overhead in today's ever changing and uncertain financial climate. Nothing is promised. And so many businesses desire more when they are flourishing with what they already have. More is not always more.

David Barton worked successfully in the 90's and the 2000's. But in the 2010's, it failed to match its competitors, such as Crunch, Crossfit and Barry's Bootcamp. I didn't relish paying $135 a month also to find the locker rooms smelling of many different body parts and how dark it was in the gym. You couldn't see anything, it felt like a nightclub and there was a lot of attitude from many as another commenter pointed out. Not my thing, but to each their own.

I hope those who were terminated without warning can at least file for unemployment and secure other work opportunities in the meantime. RIP DBG.

I was also a member for a couple years but finally had to cancel due to the overwhelming amount of jerking off in the steam room. Even some of the gay guys were disgusted. It's a huge problem here in NYC. Please, my gay friends, have some respect and do that ish elsewhere.

Sneaking away in the middle of the night is just plain sucky.

The problem with this gym was the attitude. As a former member, I just didn't understand what the fuss was about. Sure I saw famous people all the time, but they didn't want to be bothered, just as I would have imagined. The real attitude came from many of the younger members who somehow thought they were better than those who were older or less in shape than they were. Sure there were bells and whistles, but that's it. Half the time most of the machines were out of commission. And the rates were increased a lot. I am not shocked by this. I saw it coming. My heart really goes out to those who lost their positions around the holidays. I've been there. It sucks, but things do improve in time. Happy Holidays!

RIP my disco dungeon DBG. May you be scooped up by Equinox (with a new lighting plan and taste). I look forward to reading all the troll grumbles and having a gym floor entirely above ground with views again.

Just received this email. Nothing yet about the money they stole from everyone!

The owner of the building has obtained a key to the premises and can now open it to you to retrieve personal belongings from your lockers.

The space will be open and access to the locker rooms will be available on Wednesday, January 25 from 11 am – 3 pm and again from 5 pm - 8 pm.

This is the only part of your relationship with David Barton Gym that we are able to help with. Please come during one of these windows of time and bring identification and something to carry your belongings in.

Thank you for your patience.