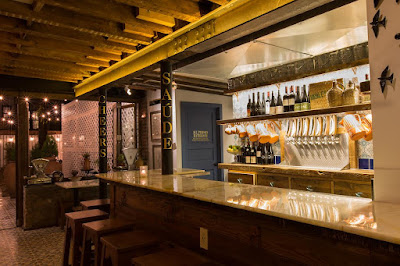 After several weeks in soft-open mode, Taberna 97 has officially opened its doors at 97 St. Mark's Place between Avenue A and First Avenue... 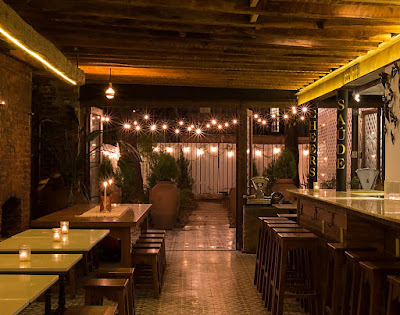 The owners (Eric Baker and sisters Patricia and Raquel Sanguedo, who also own the bar St. Dymphnas on the same block) are behind this venture, modeled after a traditional Portuguese taverna. (The Sanguedos are originally from Porto, Portugal. Baker and Patricia Sanguedo are married.) 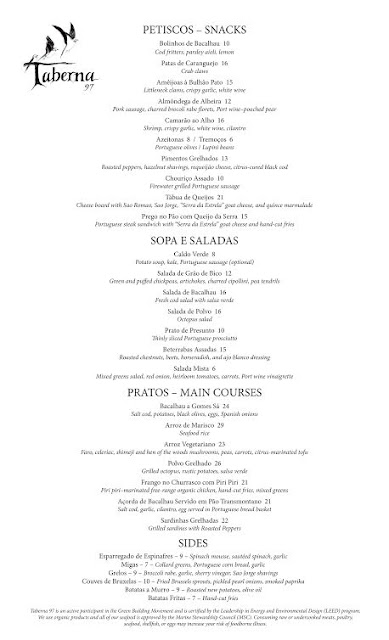 There was a long build-out here. The owners said that Taberna 97 was constructed to meet standards set by the U.S. Green Building Council (USGBC) and is certified by the Leadership in Energy and Environmental Design (LEED).

The previous tenant, Yaffa Cafe, closed (in September 2014), in part, because the city deemed the back patio illegal after being in use as a dining area for 31 years.

As previously reported, there aren't any plans for the Taberna team to offer backyard dining. "Let me assure everyone involved that this has not been nor is it the case," Baker told us back in September. "Our plans for the garden involve landscaping and beautifying so it can be enjoyed from inside our space."

Already ate there, the food was good -- though they didn't have main courses yet, so it was more tapas-ish.

Not a big fan of the backless stools though.

Dymphna's is one of my favorite bars, particularly for soccer watching.

Okay, what is "firewater grilled"?

This is cool, there arent many Portuguese options in NYC, Louro closed, rip. Im excited to try it, Dymphnas is a good bar, I imagine they will bring the same philosophy to a restaurant.

The food sounds delicious but this is yet another new East Village restaurant I can't afford. If they would consider adding more affordable options to the menu so you can get a full meal, I would love to try the place!

Yes, yet another East Village bar likely with exorbitant rent. Unfortunately it's a fine between affordable options and profitability in our neighborhood. Hope they make a go of it.