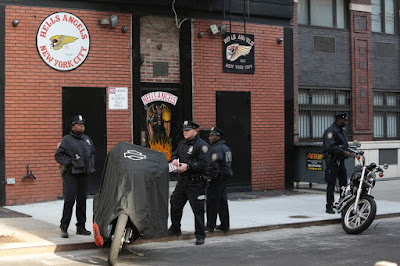 Police have arrested a 52-year-old Bronx man for a shooting that occurred early on Dec. 11 outside the Hells Angels clubhouse, the Daily News reports.

The Post names the suspect in custody as Anthony Iovenitti. Police sources have alleged that he shot Valley Stream resident David Martinez, 25, in the stomach during a late night/early morning fight outside the clubhouse between First Avenue and Second Avenue.

Police said that the fight began after Martinez exited his friend's Mercedez-Benz to move an orange parking cone so that the car could pass a livery driver stopped on the street. This prompted a confrontation that ended with the shooting.

According to a previous report in the News, police were looking for a suspect who wore a hat with the word "dad" on it. Both the Daily News and the Post reported that the members of the Hells Angels had not been cooperating with the NYPD's investigation.

In a fairly large operation last Tuesday, police, armed with an Environmental Control Board Summons, shut down the street and removed two Hells Angels-branded planters, a bench and a ramp from outside the HQ. 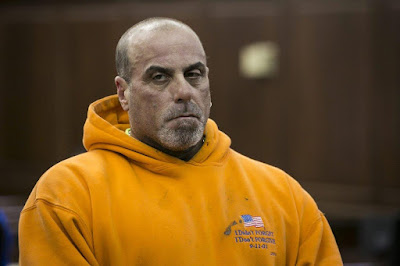 [Pool photography via the Daily Mail]

Iovenitti (pictured above) was arraigned on assault charges, according to published reports.

Iovenitti was also reportedly arrested in October for another fight over a parking spot.

According to the Daily Mail, "Martinez's colon was severed by the bullet, which became lodged in his spine."

He has been recovering in the hospital but was reportedly too scared to speak to police amid fear of reprisals from Hells Angels.

Defense lawyer Ron Kuby said today during the arraignment that "Martinez as the aggressor."

“This was not the cone wars,” Kuby told Manhattan Criminal Court Judge Lyle Frank. “(Martinez) grabs a chain from the Mercedes. He starts swinging the chain.”

Kuby also criticized the cops for ripping open Christmas presents in Iovenitti’s upstate home in a search that “caused mayhem in the apartment.”

Iovenitti is a “prospect” with the notorious motorcycle club, a step away from becoming a full-fledged member.

I think I see a marketing opportunity here.

The victim was just moving the cone so the car he was in could drive around a livery truck parked in the street. How ridiculous and unnecessary it was for the Hells Angels to react so violently.

But he has done a service, tearing apart their stupid Roger Corman movie tie in.

Well 2:20 am , i think reacting violently is in the job description.

> I think I see a marketing opportunity here.

:-) :-) the HA have been a brand name for a long time. visit one of their websites to buy branded merchandise.

Grieve, you only mentioned the brand of the automobile once in this article.
Please try for a minimum of three mentions any time you reference this case.
As we all know, the brand of car is the most critical element here.
Thanks.

"the members of the Hells Angels had not been cooperating with the NYPD's investigation."

So why aren't there more arrests then? Isn't such non-cooperation considered obstruction?

Thanks for the update Grieve! HA are not nice neighbors. Hope the police arrest some more.

Anthony is one of the nicest guys i know, has a heart full of love, and willing to help anyone who may need it, iam blessed to have this man in my life, MERRY XMAS BOYS ON 3RD ST.