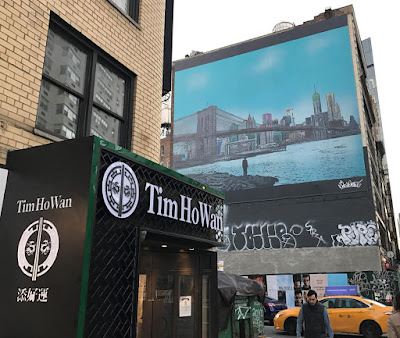 And the official grand opening will be Jan. 18 here on the northeast corner of Fourth Avenue and 10th Street.

Here are more details from the media advisory via the EVG inbox...

• The dim sum menu features the world-famous BBQ Pork Buns along with other Tim Ho Wan specialties such as the Steamed Rice Roll stuffed with BBQ Pork, Pan Fried Turnip Cake and Steamed Egg Cake. The Deep Fried Vegetable Spring Roll and French Toast with Custard Filling, a Tim Ho Wan spin on the classic French toast, are the two dishes that will be exclusive to the New York restaurant. All items are priced $5.50 or lower and the full menu will be available during the soft opening phase.

• Tim Ho Wan’s Grand Opening will be on January 18th from 3 – 10 pm. Both the date and time were carefully selected based on the Chinese lunar calendar, to bring good luck to the restaurant. To celebrate and kick-off the official opening, there will be a dragon dance performance in front of the restaurant at 3:00pm EST. After the grand opening, Tim Ho Wan will open for normal business hours from Sunday – Thursday 10 am to 10 pm and Friday – Saturday from 10 am – 11 pm.

The address was last home to Spice, which closed in December 2014.

I assume there will be a constant line around the block for this restaurant.

There probably will be a line but is that always a bad thing? Are the lines at Russ and Daughters and Katz's also bad? This isn't food served in a hoof and it doesn't look like the prices are much higher than in Chinatown.

Can we give it a rest with the Asian restaurants, bagel shops, and sweets places?

Yeah, give it a rest with the new restaurants and dining options! Kids these days.

I just walked by and saw that workers were removing/replacing 2 large windows because they had already been defaced. Stay classy everyone.

Or just feel free to ruin other people's property/work because you're in the mood.