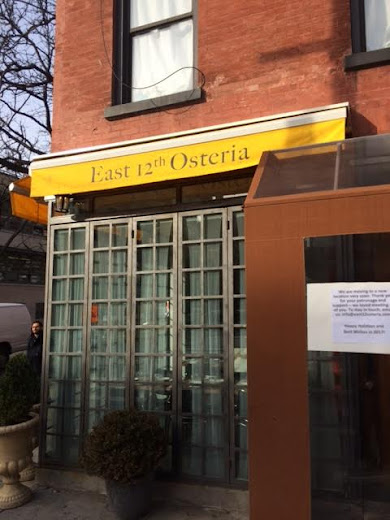 Here's the sign that greets patrons at East 12th Osteria on First Avenue at 12th Street... the restaurant is relocating... 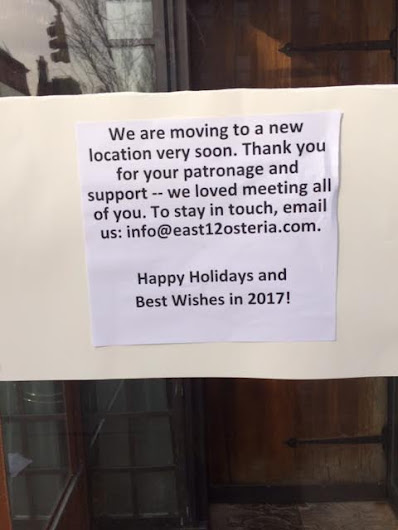 The relocation notice coincides with a posted Warning Seizure flyer via the New York State Department of Taxation and Finance... 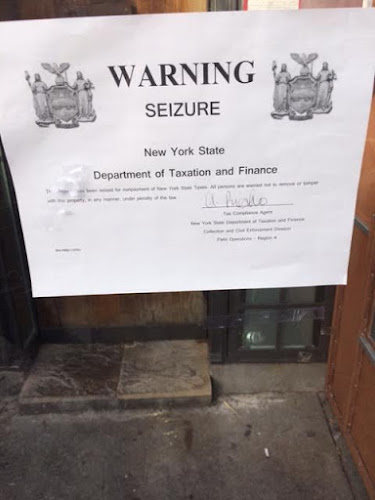 The sign notes that the business has been seized for nonpayment of New York State Taxes.

The restaurant opened in March 2013. The space was previously held by the Fuji Apple deli, which closed in April 2011.

Thanks to dwg for the photos!

Eater reports that the state seized it for more than $190,000 in unpaid taxes. "The restaurant ... had 14 open warrants from the government, mostly for unpaid sales tax."
Posted by Grieve at 4:13 AM

In case anyone needs a reminder of how difficult it is to operate a restaurant in NYC, two years is now considered a long run. I wish them success in their next venture.

No more expensive restaurants in the East Village. Good riddance.

This place never hit it so it's no surprise. I love food but I don't like to gamble on new places with their rent-driven prices. Consider The Tang. Why should I pay $12 or $13 for a bowl of noodles when I can get fine noodles at Xi'an for $9 or so. If I'm looking for more high-end noodles, I go to Momofuku Noodle Bar. I walk by, but I don't buy...

Oh Please bring back that corner Deli...I miss these fruit and vegetable stands.

There are certainly less and less affordable place to eat in the neighborhood than even a couple of years ago. I'm not talking about fine dining (whatever that means) but a place to go when you realize your fridge is empty, you had a long day and want something good, simple and well priced. As the neighborhood attracts more tourists each year businesses are opening for them and not so much for residents (marshmallow shop anyone) countless sugar based businesses such as ice cream, cookie and ice cream shops. Meanwhile useful services like tailoring, shoe repair, etc.. can't keep up with new leases. I guess we all know this but I just had to say it. Sigh......

It looked appetizing but I never tried as it seemed quite expensive for what it was. I don't mind paying more for good food but for food you can get anywhere it was overpriced.

God, it sounds more like a criminal conspiracy than a restaurant with all those warrants. I'll have that eviction notice with extra cheese, please. No taxation without arugula! Give me parmagiano or give me death!

As I passed this place many times while picking up my All American mac and cheese with breadcrumbs from S'Mac, it always looked like a date place with the foofoo translucent curtains. I guess the problem is not enough people are dating anymore in this random stranger app-based hookup culture. Which explains why cases of syphilis are up nearly 30 percent since this time a year ago. Reports of gonorrhea and chlamydia are also on the rise, especially in New York. Millennials aren't using condoms, but they do use Tinder. So maybe a Tinder bar would work. Get a free hookup with every cocktail. Call it "Tinder Bar, we put the Happy Ending back into Happy Hour."

Always raised an eye brow to opening up an up-scale italian restaurant directly across the street from another up-scale italian restaurant, Hearth, that's been established and well-liked (not crazy about their portions and prices but everything else is class). I am sure someone could advocate the differences in menu with Osteria being northern italian but it always came off as a long shot.

11:08, I can agree in spirit but a lot of these new higher end joints don't or won't make it. The EV is still the king of cuisine on a budget.

I love Italian food, and this place looked nice, but I couldn't justify the prices, so I didn't eat there. I think if you want a long run in this neighborhood, you have to price the food better. Foodies are going to move on at some point. You need to make your neighbors regulars, and this place didn't do that.

The one time I wanted to eat there (when they first opened) I got a little bit of a "look-down-their-noses at me" attitude when they said they couldn't seat me until very late. I didn't bother after that, though I recently looked at their menu in the window (on a weekday evening when they were EMPTY) and saw a burrata appetizer was $17 - which is never going to happen on my budget. $17 for an APPETIZER??

But more to the point: Not paying one's sales tax is a very dumb thing to do; it's not like the tax authorities are going to look the other way.

I actually interviewed for a position here before they opened. The manager or owner who interviewed me was rude and unprofessional. They made it seem like I was applying for a position with NASA or The Pentagon when I just wanted to find a waiting gig in between jobs. I carried ten years of NYC hospitality experience and it still was deemed inadequate. The vibes I received from ownership were pretentious and holier than thou. A total turn off. Its a restaurant. That's it I've walked past numerous times for the past three years and it didn't look busy. And the menu was overpriced. Who wants to pay 22 dollars for a plate of pasta? Not me.

There needs to be a better influx of restaurants/venues in our hood that are appealing with delicious cuisine that won't break your budget. This one didn't fit the bill. And they should have paid their taxes. Oh well.

Sales tax - the money you paid the restaurant that they kept instead of forwarding to the state and city.

I'm hoping for a deli, every corner should be a deli.

I passed by and it was open Friday night--did someone pay off the tax bill?