That time this restaurant closed after less than 2 weeks on St. Mark's Place 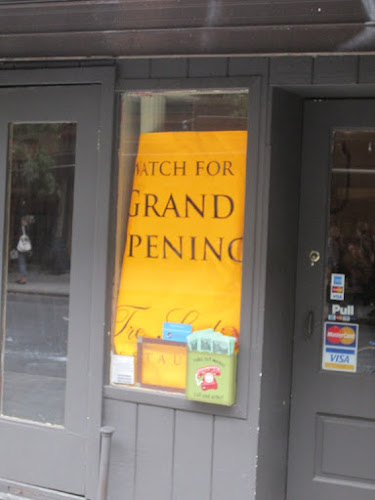 In recent months, several restaurants have closed after a short time in business.

In late November, for instance, 100% Healthy Blend (or maybe just Healthy Blend) shut down at Second Avenue and Fifth Street after less than three months.

And at the beginning of November, 'Merica, described as "the most American bar and restaurant in the world," switched concepts after three weeks in operation on Sixth Street between First Avenue and Second Avenue.

Each time a restaurant comes and goes so quickly, someone asks if this is a record for a closure.

In recent years, at least in the nine years of EVG, an Italian restaurant called Tre Scalini holds the dubious East Village record, closing after less than two weeks at 130 St. Mark's Place in 2011.

Back on June 17, we pointed out that an Italian restaurant called Tre Scalini was taking over the former Bello's space at 130 St. Mark's Place near Avenue A.

I meant to note when they opened... If I had to guess, then I'd say they opened around July 1... During the weekend of July 8, I spotted this sign... 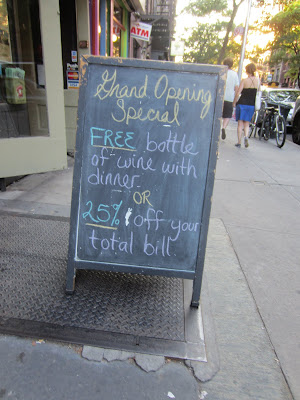 I walked by a few times and never saw anyone inside, save the owner and a worker or two. I last saw it open on July 10. I've walked by every day since then. It has not been open in the past 10 days. 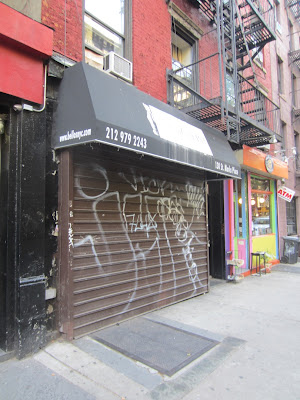 If this is all true, then it was probably a good idea that they never changed the awning from the previous tenant.

They weren't even open long enough to merit a Yelp review.

By my count, they were open nine or 10 days. I wondered how many guests they served (if any) ... and why they decided to bail so quickly. (Did their lease have some kind of escape clause? There was still the cost of renovating the space.)

Tre Scalini wasn't a new venture. They had a location on 58th Street between Second Avenue and Third Avenue that eventually closed. They re-opened 13 years later on St. Mark's Place. There was also a location on Melville, Long Island, that now goes by a different name.

The restaurant that eventually took over this space, Kura, has been open for three-plus years.
Posted by Grieve at 4:12 AM

Email ThisBlogThis!Share to TwitterShare to FacebookShare to Pinterest
Labels: restaurants that are now closed, Tre Scalini

Well, maybe someone put a hex on the space; 130 was the longtime home of Whole Earth Bakery and Kitchen. That landlord deserves what he gets—although with each new tenant he can raise the rent, so that's not exactly what I mean.

I always assume it's the landlord's fault.

EVG, you are missing out on the great story. A little investigative blogging about why the resties open and close so quickly could propel you into the national limelight. Okay, maybe just lower Manhattan limelight. There is a great back story, I'm telling you.