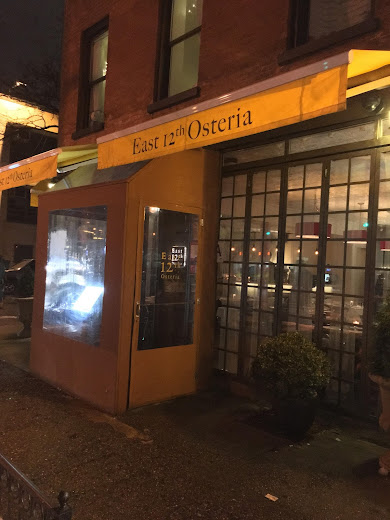 This comes after the State seized the space early last week for nonpayment of taxes. Those notices coincided with flyers stating that the restaurant will be relocating.

Despite the back taxes, the State appeared to be willing to work it out with chef/owner chef Roberto Deiaco.

Department of Tax and Finance spokesman James Gazzale says that they are still in contact with the owner and want to work out a plan to return the business. "We never want to see this happen," he says.

We reached out to East 12th Osteria for comment and will update when/if we hear back.

So does this mean that the state has opened the doors and is back in the kitchen attempting to sling hash? That sounds like some sit-com shit right there.

Still not going to eat there, b/c now it's likely their prices will go up as they try to repay the taxman.

And if they'll cheat on their taxes to that extent, heaven only knows what shortcuts they may take on food purchase/prep.

Good luck to them, but I'm still not a customer!

If you miss a quarterly sales tax payment you are fined 10%(120%p.a.) of total owed every month it's not paid. It's compound interest so gets to $190,000 pretty fast.
Cut the guy some slack and go eat there, he and his staff have families and it's the holidays.

@6:08am: And the owner didn't know about tax penalties? I'm sure when you miss a quarterly payment, they send you a letter telling you about that. Perhaps he's a better chef than he is a businessperson - he wouldn't be the first nor the last to be in that category.

The IRS underpayment penalty is not 10% a month.

Tax payments are due quarterly. And it isn't 10% a quarterly. Maybe with fines it would be 10% a year. And that's just on the amount you underpay. So to get to $190K you have to seriously underpay for awhile or make a ton of money and not withhold enough.

@ 6:08 I believe the maximum penalty for unpaid taxes is double the amount owed, plus interest. It's not 10% compounded monthly.

@6:08 is correct. The state seized the place so it was likely nonpayment of sales tax. Not the IRS and it is 10% compounded monthly. Obviously none of you have ever run a business in this town which explains your cavalier attitude towards a struggling businessman's woes.