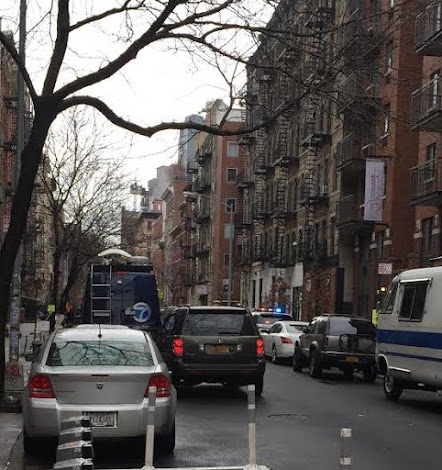 [ABC 7 and the NYPD on East 3rd Street yesterday. Photo by Steven]

A few more details are emerging about the shooting that took place outside the Hells Angels HQ on Third Street early Sunday morning.

Per previous reports, a 25-year-old man was shot in the gut after moving an orange traffic cone outside the HQ between First Avenue and Second Avenue.

The victim, identified as David Martinez of Spring Valley, and his friends were in a Mercedes Benz on the block. Earlier reports stated that they tried to move a cone to park. However, published reports now say that they were stuck behind a livery cab, and tried to move the cone to pass. Someone from the clubhouse reportedly told Martinez not to touch the cone. A fight ensued, and Martinez sustained a non-life-threatening gunshot wound to his stomach.

According to a follow-up report in the Daily News, Martinez kicked the man who shot him, and investigators hope that DNA on his boot might help find the suspect, called a prospect of the club.

The fracas ... started when Martinez and four friends pulled up in a black Mercedes-Benz at about 1:20 a.m. and moved an orange cone in front of the building, sources said.

Martinez's friend, Joseph Gray, 25, was driving ... He didn't realize what the building was.

Martinez's male friends — Gray, Edmond Peters, 27, and Cecil Peters, also 27 — got out of the car, and more of the club's members spilled out of the building, sources said.

The two groups squared off and, at one point, Gray took a chain out of his trunk and started swinging, police sources said.

Martinez got the better of the prospect, punching and kicking him, and knocked him to the ground.

When Martinez moved in for another kick, the prospect sat up, gun in hand, and fired once.

According to the News, police are looking for a suspect who wore a hat with the word "dad" on it.

Meanwhile, the Post is all over the cone story. Yesterday morning, officers sitting in a police cruiser by the HQ noticed another orange cone outside the building.

[A]ll hell broke loose when a cop removed the orange cone and tossed it into a cruiser, prompting a roughneck lady Angel to burst into tears.

“I don’t know what to do! Why are they doing this?! I’m just trying to do the right thing!” the motorcycle mama sobbed.

The crybaby biker then hopped in a Chevy and nearly plowed into a Post photographer. Cops slapped her with three summonses, including failure to signal, failure to wear a seat belt and reckless driving, a police source said.

According to the Post, the members of the Hells Angels have not been cooperating with the NYPD's investigation.
Posted by Grieve at 4:30 AM

Not that I condone violence in any way, but I find it kind of thrilling to hear that the Benz boys had a chain in the trunk and that the poor kid who eventually got shot was kicking the crap out of the old man because someone dared to touch one of "Dad's" clubhouse's precious little cones.

In general I feel the Hell's Angels should be left alone to do whatever the hell it is they do all day in there, but the way some people here defend them for, let's face it, regular complete fucking overreaction to anyone breathing around their ~oooh sacred~ bench, cones, and stretch of sidewalk is ridiculous.

What a mess, hope they find "world's worst Dad" soon.

There is going to be a film shoot on 3rd Street Wednesday - the film crew has placed their own cones along the block today... wonder what is going to happen with the Harley's when they start filming...?
-Mr. Baggs

no sympathy for either side. the yuppies who had a chain in the trunk, nor the hells angels with guns, which btw appeared to have shot in self defense, if the chain story proves true.

Note to the Hell's Angels. Trump himself said we need law and order. Listen up, he is our leader now!

People defending the Hells Angels shows exactly how crazy the regular commentors on this site are.

If they're from Spring Valley than they are NOT yuppies.

HAD to be a dumb B&T. Dude told you not to move the cone, you do it anyway. Stay in your little bubble and please don't come in the city. These little jerks NEVER know how to act in NYC. Friday nights and Saturday nights are generally always ruined by these little turds.

I don't quite understand the significance of the make of the car?
It keeps being mentioned as it would if it were a missing vehicle or something.

the angels are a motorcycle club..why r y'all so obsessed.they have jobs and happen to own that house on 3rd

Nah you know who ruins Friday and Saturday nights in NYC? As sholes who shoot people over parking spaces.

Lots of misdirected anger on here. Hells Angel guy shoots someone over a parking space good but the bros, the yuppies GRRRRRR...

Hells Angels do not own those parking spaces thus have no right to claim them as their own with cones or anything else.

What makes these people jerks? They want to park their car then go somewhere and have a good time? You know nothing about these people. The only "jerk" was this lone Hells Angel telling four guys to move their car like he owns the spot when he doesn't.