Dahlia's Tapas Wine Bar has been dark of late 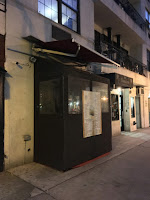 The cafe between Second Avenue and Third Avenue has not been open during posted hours in recent nights while the phone kicks into a generic message about not having a voicemail box (or voice mailbox) set up.

Its sister restaurant, Dahlia’s Fine Mexican Cuisine on Second Avenue at Fifth Street, was busted by the SLA after serving a reported 50 minors one night in January. The Mexican restaurant then closed in May.

The owners replaced it with 100% Healthy Blend (or maybe just Healthy Blend), which closed after three months.

From Urban Dictionary: Peelin' Potatoes - When a business may or may not be permanently closed, leaving the neighborhood shrouded in a Dateline worthy mystery.

Yup, I think I left a tip that this place had also been busted over the summer for under-aged drinking, although they managed to re-open. Is their Greenwich St. location still open?