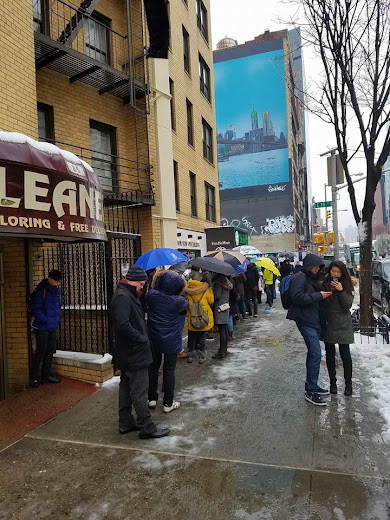 As previously noted, the first U.S. location for the Hong Kong-based, Michelin-starred dim sum parlor Tim Ho Wan opened on Friday... and, not surprisingly, the opening here on Fourth Avenue and 10th Street attracted dim-sumgoers who waited in line in single-degree temps that day for the cheap goods. (Rather inexpensive — every dish costs less than $5.50.)

Eater and Gothamist both reported on the lines.

Chef Wai Chan will be running the kitchen here. He’s a Chinese immigrant who’s been living in New York for years, and before getting going in the kitchen, he went to Hong Kong to train for several weeks. Tim Ho Wan’s quality is what must set it apart from other dim sum restaurants, Pui says. The team’s been working on the location since last year, and they’ve tried many of the dim sum restaurants here since then.

After a further wait of 50 minutes, during which the queue crept along steadily in a way that encouraged us to remain, we finally reached the front door, where a woman with an iPad stood.

She was very nice, but told us that our further wait would be 2.5 hours, and offered to take our cell number and call us back. I objected, "Normally, when you stand in line, you expect to get in when you reach the front of the line. Couldn’t you have taken our numbers when we arrived so we didn’t have to wait in the sleet?" She shrugged, and didn’t answer. My guess is that the spectacle of dim sum devotees shivering in line for hours was an important element of the opening publicity campaign...

I refuse to stand in line to eat a meal, there are just too many options to do so. But then again I'm not a foodie nor do I take pictures of my dishes.

I still want to know if they will do take out.

Give it a fuc king rest with the Asian restaurant openings.

NYC is/should be more than that food-wise.

Spare me the "bigot" nonsense as I am sick of the following openings also:

I'll check this place out!...in 6 months when the hype dies and I can walk-in (or wait a realistic amount of time).

IMO, there is no sane reason to wait on line in sub-freezing cold to eat dim sum in NYC.

Tired of "Asian" restaurant openings? As if it is one culture. Hilarious.

Anytime someone says something like "Spare me the "bigot" nonsense" you know that nothing but ignorance came before and will follow.

2.5 hrs is a joke right, i assume they were on Punked... is Punked still a thing?

OK, this is why I refuse to wait in line for trendy restaurants (or trendy anything, really) - that after waiting that long, the snotty hostess says "oh, that'll be another 2.5 hours". This is NYC and there's plenty of great dim sum to be had without putting up with that attitude; this anecdote just lost them some potential customers. Good luck with your "opening publicity" campaign - I wonder how long before that location is for rent again?

I was quoted a wait of 5 hour 20 minutes to 6 hour wait today around 4pm . They take your number and call you anytime . I believe they dj take our