14th Street busway markings arrive; so does a lawsuit to try to stop it 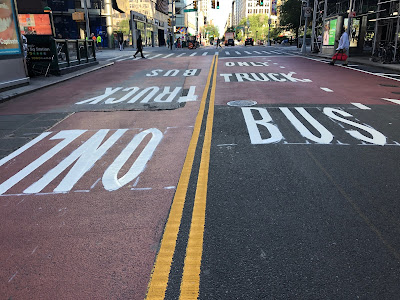 The bus/truck markings have arrived on 14th Street ... where the busway launches on July 1... 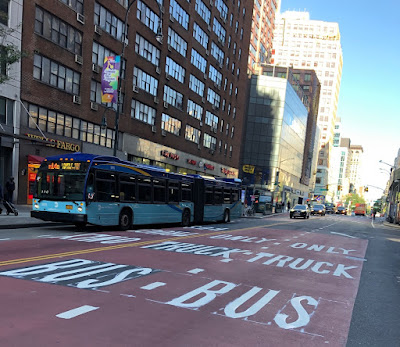 A quickie recap of this "experimental new transit improvement" ... to help move people during the L-train slowdown, private through-traffic will be banned between 6 a.m. and 10 p.m. on 14th Street between Third Avenue and Ninth Avenue. Buses, trucks and emergency vehicles will be given priority in the center lanes between Third Avenue and Ninth Avenue. Cars will be allowed to make pickups and drop-offs as well as access local garages.

The busway also harkens the arrival of the new M14 Select Bus Service, which features off-board fare payments and all-door boarding, starting on July 1. To also help speed up travel times, the MTA is eliminating 16 stops (down from a proposed 22) along the M14A and M14D routes.

As you may have read back on Friday (Streetsblog had it first), a coalition of Manhattan landowners is using state environmental law is trying to stop the busway plans from moving forward with a lawsuit:

The 14th Street Coalition — which comprises property-owner groups in Tony Chelsea, the West Village and the Flatiron District — says that the Department of Transportation’s proposed “busway” violates state environmental law because the agency didn’t conduct a serious assessment of the impact that banning cars from 14th Street would have on neighboring residential streets.

“Closing 14th Street to vehicular traffic would not only cause horrific traffic jams on 12th Street, 13th Street, 15th Street, 16th Street, 17th Street, 18th Street (a street with an MTA bus depot at the corner of Sixth Avenue), 19th Street, and 20th Street, it would also cause traffic on north-south avenues including Eighth, Seventh, Sixth, Fifth, Fourth, and Third Avenue, and Broadway, and Park Avenue,” the suit, filed by lawyer Arthur Schwartz. “The traffic will bring with it air pollution and noise pollution.”

A spokesperson with the city's law department said that the claims don't have any merit.

"I think it’s pretty clear that this is bluster," Ben Fried with TransitCenter told Curbed. "It’s absurd to file a lawsuit on environmental grounds for a project that’s going to reduce greenhouse gas emissions and make transit more efficient."

The Villager has a recap of the lawsuit too.
Posted by Grieve at 4:23 AM

Not to topic drift, but I like how those street signs are made. Here is one from a few years ago, lettering guide lines and all: Street calligraphy
https://skeetmotis.blogspot.com/2017/02/street-calligraphy.html