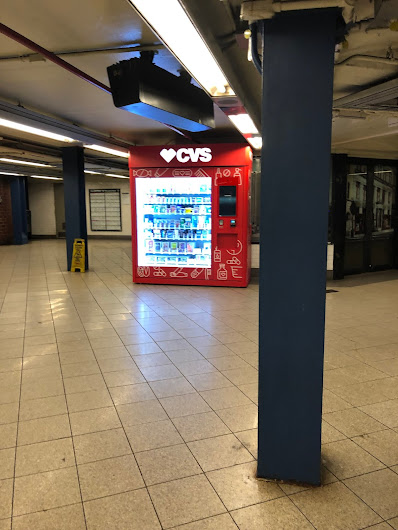 EVG regular Pinch shares this photo from the Union Square subway entrance at the Food Emporium.

This CVS vending machine arrived yesterday in this location. It's part of an MTA experiment to offer commuters stuff that you may find at — a CVS!

NY1 has more in this report:

The MTA says it will seek more vending machines from other companies, during this pilot. The transit agency gets a percentage of every purchase, but declined to say how much.

The boxy machines offer a variety of products for New Yorkers on the go. Some of them, like ibuprofen and ear plugs, are especially suited for subway travel.

The MTA is testing the machines as a response to a reduction in subway newsstands, the result in part of declining magazine and newspaper sales. A third of the 248 retail spaces in the subway system are shuttered — most of those closed outposts are newsstands.

The MTA will test the vending machines for two years. In some cases, the locations competing with subway storefronts like one at Union Square, are just beyond the turnstile.

Meanwhile, the MTA is reportedly looking for real-live vendors to take over vacant spots at busy transits hubs such as the 42nd Street-Port Authority Bus Terminal and 47-50th Streets–Rockefeller Center.
Posted by Grieve at 4:00 AM

I remember when there used to be stuff like record stores, hot dog / soda shops and bakeries in the larger Manhattan stations...

Nobody walked off with the machine yet?

Let's hope the MTA doesn't have to wait for too long to see that this type of machine will probably be broken within days of its installation (can we ask Mayor DiBla to offer immunity to anyone caught shaking the machine to get their money back after the machine doesn't work. And when the machines are not returning their investment, they will become part of the junk that must be correctly disposed of. How much do you think a consultant got paid on an hourly basis to dream this up?

This machine is, in effect, a kind of robot that is doing a genuine human out of a job. Unless, of course, the job is installing & removing these machines...

This type of vending machine will soon be obsolete as Amazon’s Anywhere delivery service will soon be able to deliver your package directly to your hands while you are on the subway, bus or taxi, while eating in a restaurant or at the movies. Just don't order anything you can't carry.