Here are the rent increases for rent-stabilized apartment dwellers 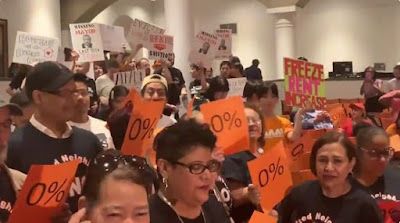 This is what the board ultimately decided on at the Great Hall at Cooper Union, based on various published reports:

• For a one-year lease, tenants can expect a 1.5 percent hike.

• For a two-year lease, tenants can expect a 2.5 percent jump.

This year’s increases are identical to those approved last year.

The changes will go into effect on Oct. 1.

The Times had some background on the decades-old tradition:

The new increases are modest given the history of the board, which was formed 50 years ago.

But rent caps have been considerably lower under Mayor Bill de Blasio.

During his first mayoral campaign, he pledged a temporary freeze on regulated rents, in order, he said, to protect low-income tenants from a roaring real estate market. A majority of rent-stabilized tenants pay more than 30 percent of their income in rent.

This year, the board considered rent increases as high as 6.75 percent, rent decreases and another rent freeze, which tenant groups supported.

Email ThisBlogThis!Share to TwitterShare to FacebookShare to Pinterest
Labels: Rent, Rent Guidelines Board