Report: Ricky's will be down to 2 NYC locations 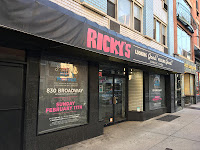 Now comes word that the chain selling accessories, cosmetics and novelties will close all but two outposts.

Ricky’s has been shrinking at a heart-stopping pace of late. It’s down to just four locations from 13 in the fall. At its peak just four years ago, Ricky’s operated 29 locations, all in the New York area except for an outpost in Miami.

The last two storefronts are at 830 Broadway near Union Square and 590 Broadway.

If Ricky’s meets a sticky end, retail experts will partly blame soaring Manhattan rents and stiffening competition with Amazon, as well as an increasingly crowded market when it comes to Ricky’s bread and butter: cosmetics, skin care and hair products.

Previously on EV Grieve:
Ricky's is closing on 3rd Avenue

The Ricky's on 1st Avenue has apparently closed
Posted by Grieve at 12:30 PM

Email ThisBlogThis!Share to TwitterShare to FacebookShare to Pinterest
Labels: Ricky's

This is so sad. Ricky’s has been an NYC staple for so long and just a cool place to get any kind of makeup (and not your Mother’s makeup either). It’s a far ways north but I think the one on 2ndAve/East 75th area is still open (for how much longer who knows).

Meh! No huge loss as far as I'm concerned, and I'm sure the original owners have made plenty of $$$$ on it over the years.

I’m surprised at how quickly Ricky’s went under, but the trends that made their demise inevitable finally caught up to them. Over the past few years the only decent crowds at Ricky’s seemed to happen during Halloween, when half of their stores were turned into a bargain basement version of Fredericks of Hollywood and the other half was like Party City. They jammed in so many costumes and masks it was hard to find anything, plus the Halloween popup stores gave them lots of competition.

Also, between all the big makeup/perfume chains and Instagram Influencers promoting their own brands, even their makeup business (which has the best margins of almost any business even invented) couldn't save them. Still, they were colorful and unique stores, a throwback to the 90’s when there was more of a need for their peculiar and fun little retail niche.

I used to love the place but then they tried to charge me $90 for a bottle of shampoo and conditioner. Never went back in. Still kinda sad.