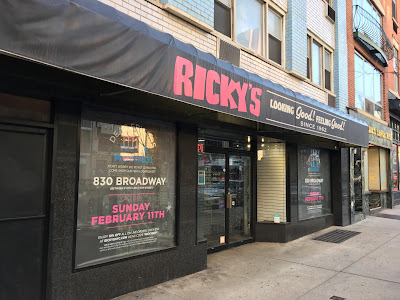 As noted back on Jan. 16, the Ricky's location on Third Avenue between 13th Street and 14th Street is closing. In case you missed the signs in the window, Sunday is the last day.

Ricky’s NYC president, Michael Long, told the Commercial Observer last fall that the chain is closing "underperforming stores" and that the company is now profitable. Apparently the East Village isn't so profitable: The Ricky's on First Avenue between Sixth Street and Seventh Street closed without any notice in March 2016.

Still, there's a Ricky's set to open on Broadway near 12th Street.

The mini chain (there are 18 locations) selling accessories, cosmetics and novelties started as Ricky Love in 1989.

Previously on EV Grieve:
Ricky's is closing on 3rd Avenue

The Ricky's on 1st Avenue has apparently closed

I want to be sad about this but they've had 90% Off signs up for weeks, and you go in there and shelves are full and nothing is being discounted, so I'm sure it's all being shipped to their other stores. I'm glad there's still that nice big Ricky's on 14th west of Union Square, but the chain feels like a relic that lost its original 8th Street spirit long ago. Now it's all just overpriced hair product and cheap costumes-in-a-bag

I went in about a week ago or so, and there was nothing on the shelves.

The Broadway store is already open and is nicer than the 3rd Ave location. It's just north of the Strand.

I have specific hair products I need and I can only find at Ricky's, so I'm glad they're still around. Otherwise, I'd have to order online.

Rickys jumped the shark a long time ago. The only time I go in there now is around Halloween to laugh at the ridiculous costumes they fill the place up with. It used to be a nice local store but now all there is that it’s just overpriced beauty products, and overcrowded aisles. They did themselves no favors by catering to Santacon either. Bye Felicia!

Yeah 10:49 am, I went in yesterday looking for the sale, and was told that NOTHING was discounted, as they were just moving everything to the new Broadway store!

Ricky's is a decent store, but it IS part of the scary phenomenon of people being waaaayyyyy too into "beauty products."