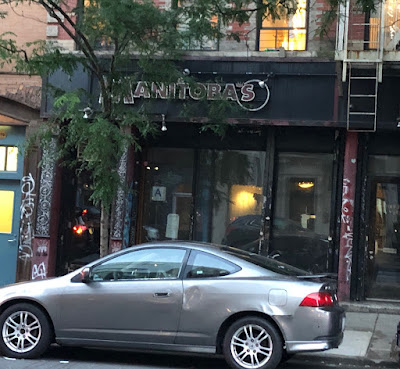 Manitoba's is now closed at 99 Avenue B.

Proprietor Handsome Dick Manitoba confirmed the news about his namesake bar, where framed photos of punk icons lined the walls here between Sixth Street and Seventh Street these past 20 years.

A bar employee said that Tuesday was the last night in business.

Manitoba said that he was in the dark about the official reasons for the closure. In a text exchange via Instagram, Manitoba said that his role of late had been working the front of the house — "greeting people, bringing people in ... telling stories, laughing, watching Yankees games, listening to music." He continued, saying that he "had a big rock-star partner" who had previously suggested that they sell the bar, though a sale never materialized. He said that other people were managing the paperwork and legal matters.

"So my guess — this is not a fact — is [the partner] said just close it down. It’s an educated guess because nobody else had the right to say that unless it was people we owed money to." (There had been financial difficulties in the past stemming in part from a lawsuit involving the Americans with Disabilities Act. A successful crowdfunding campaign in early 2015 helped raise more than $30,000.)

Here's part of a message that Zoe Hansen, a former owner and partner of Manitoba's, wrote on Facebook:

Yes, MANITOBA’S Bar has closed its doors after 20 years. As you all know I managed, & worked from day one with Richard Manitoba to bring a real down & dirty fun Rock N Roll Bar to the East Village. I met Richard in that bar 20 years ago. Many have met their ex's in that one small room after I. Giving it that eternal pivotal moment we can each cherish, or not. However your memory sways, I give respect to a scene now total gone from a once glorious block.

Thank you to my friends who’ve supported the bar over the two decades it survived.

For his part, Manitoba called it a "great disappointment that after 20 years I couldn’t keep my bar going in spite of my age — as young and strong as I am."

In a follow-up message, he said that the Manitoba's website will live on.

"In spite of the fact that we’ve closed, we know that people from all over America and all over the world have excitedly entered our doors for 20 years," he said. "This wasn’t a 'bar' to them. It was a special, relaxed home away from home." 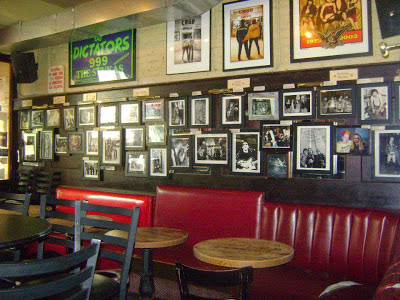 Previously on EV Grieve:
Manitoba's is in danger of closing on Avenue B
Posted by Grieve at 2:30 PM

Steven Van Zandt is why it existed as long as it did.

Ugh! Not really a surprise, but sad nonetheless. This was a unique neighborhood spot and I had a great time every time I visited.

I threw my drink at a douchebag of a date I had here years ago.

not surprised, they were asking bartenders to buy booze. Oh yeah, the new partner is Laura McCarthy. So I guess renovations are about to start and soon Malin will have another place to show how he's 'saving' East Village.

We talked about this for years Dick Manitoba. You could have done more to keep her going and I’m very saddened she’s gone now. The Bowery is dimmer tonight.

Where the hell am I going to drink when I visit NYC now?

bartenders hadn’t been paid in anything but tips in some time. Not surprising

That was my understanding from a good while ago. And that is some lowlife shady shit.

another nail in the coffin of my glorious misspent youth. Oh well, nothing is the same down there anymore, anyway.

Glad I was able to get there before I stopped drinking. It was a fun night. RIP from a Red Sox fan.

How many bagel stores (that make them) are left?

aw man- so many places closing. i will miss Manitobas ����

Too bad...lots of great memories, star sightings, and late-night debauchery.

Sad to see this happen but it seemed inevitable for a while now. I will definitely miss it.

According to the article his partners closed the bar and didn't even tell him!!

They played the best music there...don't take anything for granted...

As someone who has lived on the block for 23 years.. since I was 23, I have been there once.

A little too dive/dirty for me at this age... prefer wine or a better cocktail and have always preferred 7B .

Hopefully something good will come in ... hoping a nice restaurant that does not have an annoying BRO brunch crowd that is wasted w blasting music

@Anon. 10:52 - Check out the jukebox at Lucky's on B between 10th and 11th. If not quite up to Manitoba's standards, it's still the closest thing you're gonna find. Lots of old punk and R n R.

I’m getting old. I think of Manitoba’s as being one of those “fancy new” places that opened East of A after they cleaned-up the park and got rid of the drug dealers on 7th Street.

Dead neighborhood. The only decent rock bars left are double down and iggys on ludlow st.

Lots of great conversations with Richard on pro wrestling the jukebox turned me onto a lot of great oldies groups and artists. The last time I was there this past February as I was glad sold Mich Ultra since I don’t drink anything harder since 2017, I heard a catchy tune from the Stones I have never heard before (‘Stupid Girl’). I ordered the cd and am glad I did. Cbgb’s, Continental, Holiday Cocktail Lounge, The Raven Cafe, all long gone, now Manitoba’s...the end of east village grit is definitely felt

Uh...did anyone ever get paid a wage as a bartender? We always worked for tips.

Great memories of Manitobas in it’s first years...BZ (before Zoe). Amazing jukebox & great DJ’s, shows & stories. A real LES NYC Bar. So much flavor has been lost in the last 8 years in that city. Sorry to hear this news.
You are loved Manitoba!

The EV still has 7B, Mona's, Sophie's, Pyramid, and Cherry Street Tavern which all opened wayyy before ALL the current EV bars did.

I will miss Zoe. Xoxo

came up from Titusville FL just to drink there a few years ago. Elana and milton were the best. Especially Elana. Went there twice to hang out with her. She knows punk rock. Miss you.