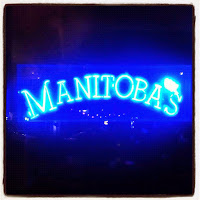 The Manitoba's crowdfunding campaign came to an end at midnight.

Well, the good news is, MANITOBA'S has ...BEEN SAVED!

According to my calculations, we have money to pay the man demanding money, fix the bar to the standards required, buy, package and mail many hundreds of perks, throw my lawyers, who have thus far worked for NOTHING, and asked for nothing, SOMETHING!

The campaign was reportedly a result of "a settlement with a man who has sued dozens of businesses under the Americans with Disabilities Act, according to court filings," as DNAinfo put it. The man, a former East Village resident identified as Luigi Girotto, 50, has reportedly sued at least 27 other businesses for failing to provide accessibility, according to court papers that DNAinfo obtained.

The bar at 99 Avenue B between East Seventh Street and East Sixth Street opened in January 1999.

The combination of creating something that physically and vibe wise preserves our great culture has obviously touched a nerve....A heart.

We hope to continue to be a fun place for people in the neighborhood, and Rock and Roll fans from everywhere. We so greatly appreciate your love and support.

Email ThisBlogThis!Share to TwitterShare to FacebookShare to Pinterest
Labels: Manitoba's

At least he didn't compare it to CBGBs again.

I wonder -- are 27 other businesses in danger of closing? What's different about Manitoba's?

I wonder how far this law extends to small businesses? I have a business in a 150 year old building which has 3 step to enter. Could I be sued by a person like this to change the architecture of the building?

8:03 AM At There is not a single bar/restaurant/business in the city that is completely ADA compliant. The law is poorly written and allows shark attorneys to swoop in and legally extort $$$ from small biz owners. It's likely that Girotto was "hired' as it were by the FL law firm behind this case and a lot of others around the country.

It's all out there online.

This is a nationwide problem. The law was written to benefit shady lawyers and their clients and hurt small businesses. Helping the disabled isnt really the point. Ken - there are plenty of bars and restaurants and businesses that are ADA compliant especially in new buildings and luxury apts/ hotels. Its the small businesses in old buildings that are targeted. Not new buildings that were built to accomodate wheelchairs with elevators wide aisles ramps etc. If you are worried talk to the building management and do some research. They got money from Manitobas. You could be next.

To anonymous at 9:11 - the answer is Yes. You had better start saving.

As always, the intention of the ADA is great, but the implementation through our shady, half-ass legislatures means that it does not take into account historic buildings and neighbourhoods - it assumes everything is stick built new construction in a Houston strip mall.

There was a piece on NPR a couple of years ago about people who make a living in CA just driving around looking for ADA issues - such as incorrect parking, ramps, steps, etc. It sound like this racket is now here. I worry about other bars & restaurants in historic buildings that cannot be made compliant and are thus targets for this extortion.

...there are plenty of bars and restaurants and businesses that are ADA compliant...

Really? The Manitoba's complaint alleged that "the entirety of the bar is taller than 34 inches, in violation of the Americans With Disabilities Act. It also cited failure to provide handicap access to the lower-level game room, a video game, and the jukebox, among 19 other alleged violations."

34" doesn't even come up to my waist and I'm average height. Name one EV bar or restaurant that's ADA compliant, that has handicapped seating (34" height) at the bar or counter.

Too many of these cases are only about the $ettlement$ for the attorneys who give a percentage to the handicapped shill.

I'm really surprised at the level of hostility towards people in wheelchairs -- and even blind people. What ever happened to the East Village of old, where people cared for one another?

This was pure and simply a shakedown buy a scumbag Florida law mill and a willing ponzy willing to sue. I hope he gets his settlement and a little "extra" payback. We should make accessibility a goal and I agree w owner saying doh should be the ones calling the shots.

Yeah, really. Is this blog ADA-compliant? If it were, I think there would be disabled folks talking about how much the ADA has changed their lives. Because it has.

News flash- nobody in the EV cares about the disabled or the blind or the homeless. They dont give a fuck. But god forbid some shitty bar might get closed down. Then they care a whole lot. Bunch of hypocritical phonies. Its a matter of priorities. But its the NYU kids who are the evil in the area. Ridiculous. I bet the Bowery Mission could use 31K a lot more than a for profit business. But hey who gives a fuck about those bums right? Is it happy hour yet?

I can guarantee you that they weren't going to close anyway.

I like how Dick Manitoba commented on this blog last week that he is so well off that he had played in 15 different countries last year, and now brags that he didn't have to pay a dime out of his own pocket since they raised enough through crowd funding when he probably had enough money to make the fixes all along. Keep it Classy, Dick!

Remember the days when there were no corner cuts from the street to sidewalk? If you were in a wheel chair or scooter back then you were really screwed.

But I'm glad the bar will work at being compliant, and they should promote that fact, and I bet it'll help business.

The misinformation in this discussion is amazing. It includes, but is not limited to: East Village residents hate the diabled, how much money someone in a touring rock band makes, the clientele of Manitoba's, the idea that people don't give charity, everyone should love the ADA even if it's basically being enforced by landshark lawyers, etc, etc, etc. Way to communicate guys.

Also 34" max height limit does not apply anywhere where there are also tables.

On February 19, 2015 at 1:57 PM, Anonymous said ...
Yeah, really. Is this blog ADA-compliant? If it were, I think there would be disabled folks talking about how much the ADA has changed their lives. Because it has.

There are screen readers available for the blind at this link, if anyone really cares.

Actually, the Americans with Disabilities Act is being gutted every day, and I'm surprised Manitoba's wasn't able to get a variance; any business that claims "financial hardship" in making accommodations usually doesn't have to comply.

There are a lot of businesses in our neighborhood that don't have a wheelchair ramp, and instead have a sign stating that any disabled person who needs assistance should buzz for it; often it means the business has a portable ramp it will bring out.

Lastly a lot of disabilities are invisible, so probably a lot of people here could use some sensitivity training.

For someone who lives in Rye, NY he doesn't seem to have too much trouble getting around. It's great that some accommodations are made to make lives easier for those that are disabled but it's ridiculous to force everyone's business to make expensive changes for 1% of the population,

An excellent article Mr. Girotto from a few years ago. Allegedly he never patronized any of the restaurants he sued and a law firm in Florida does the legal work and the court can order payment of their legal fees if they are deemed non-compliant:

If a place is non-compliant then it's non-compliant. It doesn't matter where the lawyer's office is. This law has been around for a long time, businesses need to follow it.

Next Thing is Manitoba's will get sued for letting a Wheel Chaired Customer leave the premises driving under the influence. I think we need to get Mothers Against Drunk Driving Down There, PDQ.

Wheelchair ramp? NO Tables and Chairs on the sidewalk? YES. YES. YES. said...

"The owner claimed that to make this entrance accessible was not possible or practical because to provide a ramp outside the entry would encroach out into the town sidewalk and they claimed that the Highway Dept. of (the Department of Public Works) would not approve such a request,"

Starbucks recently made an application to the Planning and Zoning Commission to offer seating on the sidewalk outside the store.

So let's see, a wheelchair ramp that extends less than 3ft from the building line won't be approved but another sidewalk cafe that blocks half the sidewalk will be just fine?

You're right though Anon@11:29pm, it's riduculous indeed to cater to the "1 percent". But I have a different "1 percent" in mind than you do.