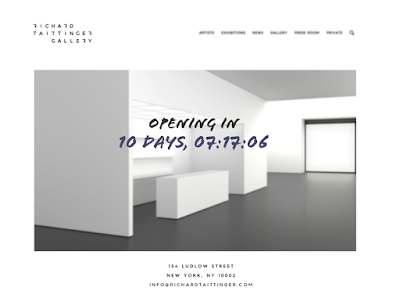 The New York Times reports that Richard F. Taittinger — a great-grandson of the founder of the Taittinger Champagne empire — is opening a 5,000-square-foot art gallery at 154 Ludlow St., where a rent hike forced The Living Room to decamp to Williamsburg.

Here's more from the Times about the gallery:

It will show the work of a roster of internationally established, midcareer contemporary artists who are underrepresented in the American market, Mr. Taittinger, 34, said.

He said he had chosen the Lower East Side over Chelsea as a location for the gallery because of the neighborhood’s potential.

“It is better to be a big fish in a small pond,” he said.

Work on the space got underway last month. The gallery is expected to open on March 3.

Previously, Lucky Cheng's was hoping to open a new LES outpost at No. 154 between Stanton and Rivington. However, the landlord reportedly pulled out of the deal.

Will they server alcohol?

Galleries have the same deleterious effect on rent.

Galleries have a similar affect on a neighborhood as "slash and burn" deforestation has on a rain forest. High end retail will follow suit followed by H&M etc.... How do I know? Look at the histories of Soho and W Chelsea. Goodbye LES it was great while it lasted.

The word which instills the most fear in people in low to middle income neighborhoods.... "hip".

How about something other than a bar, a restaurant, a bank or a HIGH-END GALLERY

Because if there's one thing the hordes of drunks rampaging through Lower Midtown South need more of its ART!

@Giovanni
Uh, so are you saying it's a good thing??

Wow, there's no winning with you folk.

Small galleries opening in the northern edge of Chinatown is one thing but when the big buck galleries follow everything goes posh. "Slow done the Rolls Jeeves I want to take in that bit of urban graffiti on that wall". Two weeks later Prada has a shop there.

now they managed to get the bars fighting against the galleries...next thing they'll get the bodegas fighting the flower-shops...and, very soon, Citi-Bank will swoop in to clean up the leftovers

Maybe they will show good art.

We hear a lot of negative opinions in the comments on this site but rarely useful positive ones.

So, what does everyone think should go into the old Living Room space (assuming the rent is around 20k a month)?

Anonymous 1:11, The fish rots from the head down.

I think you are missing the point. It's not that our opinions are negative (which many times they are.) The issue is the negative business environment that exists for every small or family owned business. At these rents only big luxury/chain businesses that can take a loss for the majority of their leases can afford to open up, and no banks are making loans to small startup businesses anymore.

A few things I'd like to see but which could probably never afford the rent would be:

A Diner: Just today Jeremiah announced that another diner, La Parisienne in midtown is closing, just like the Edison Cafe a few months ago, another diner on University Place and Silver Spurs on Broadway before that. Too many coffee shops and diners are closing, there is nowhere to go for casual affordable food besides chains like Chiplotle or Panera Bread.

A Bagel shop or Bakery: most of these have closed down. We just lost DeRobertis Bakery, but luckily it will become Black Seed bagels, otherwise we would have another Starbucks or other chain store.

A Gallery for local artists: This new gallery is being started by the heir to a billion dollar champagne empire. Somehow I doubt he even knows or cares about local artists. I hope he proves me wrong, but just take a look at the nonsense showing over in Chelsea, dominated by the likes of schlockmeister Larry Gagosian and that way too corporate Damian Hirst, and you see what the problem with the art world is these days. It's way too corporate and celebrity driven.

A great Chinese Restaurant: New York used to have decent Chinese restaurants in every neighborhood, many have closed down as more people switch to Thai and Sushi or Foodie concepts. Luckily we still have Congee Village on the LES and Han Dynasty, Xi'an Famous Foods, Hot Kitchen and Mee Noodle in the EV, but that's about it.

Dojos: We need another Dojos just like the old Dojos, but don't get me started on that one.

No more bars, clubs, dollar pizza, chain stores or luxury boutiques please, only new places that improve the quality of life in the community.