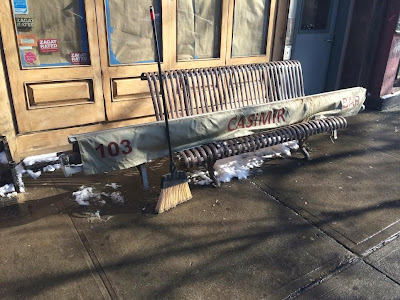 [Photo yesterday by Dave on 7th]

In the comments, several EVG readers who saw renderings for the revamped space noted that the bistro is relaunching as Pardon My French. Yesterday, workers removed the Casimir awning from the premises here between East Sixth Street and East Seventh Street.

They are not making Casimir a speakeasy. There was a huge private dining room that was being under utilized right off the front of the restaurant. So it makes sense to move the bar into it, creating a really cool bar and lounge room.

The owner showed me the renderings for the renovation and it looks brilliant. The menu will keep some of the staples but also move the menu a bit more nouveau French, more smaller plate options. Although I wouldn't have changed a thing about the old Casimir, some weeknights and even weekends were a bit slow at dinner. It is a deceptively big restaurant so I applaud the attempt to bring in more of the dinner crowd and I am sure they will do it. As for the new name, hopefully they keep it off the door, ha. I am going to call it PMF. Or Pe-em-euf.

Bedford + Bowery recently spoke with Antonin Brune, a Casimir waiter who partnered with owner Mario Carta on the relaunch. Per B + B:

Casimir fans can rest assured that Brune values the old-school feel of the interior, with its decorative tin ceiling and tiled archway leading to the bar. “It’s still going to have the same look with the low light and candles,” he said. “We don’t want to kill the atmosphere of Casimir, but the restaurant needed some love.”

PMF was hoping for a Feb. 14 reopening. No word on a new opening date.

Previously on EV Grieve:
Casimir temporarily closes to move its bar
Posted by Grieve at 4:54 AM

Email ThisBlogThis!Share to TwitterShare to FacebookShare to Pinterest
Labels: Casimir, Pardon My French

"Pardon My French" is their name...? Seriously? Oh, dear. And right next door to "Jillery" and around the corner from "Cafe C & B (a very confusing handle for a spot on 7th btwn. A & B). As a loooongtime resident of the block, an earnest request: establishments, please, work on your naming/branding skills!

Why not "French Food R Us"?

Used to love Casimir many years ago. Then the bill for a thimble filled with white wine started getting so expensive. Felt taken advantage of and stopped going. Wish them well. Dumb new name.

Pardon my french, but that name is fucking stupid.

Awesome. Just what I need. Another place in the neighborhood that charges 20 dollars for french toast. Yay. Can't wait.

Not sorry to see them go. When served the smallest glasses of red wine ever for three times a fair price, by the least caring and most condescending servers, we vowed never to return. This new concept seems equally doomed to failure. East Village regulars deserve better treatment and will get better service elsewhere.

AGREED!!! THAT NAME IS AN EMBARRASSMENT!!! More suited to Times Square tourist trap than the East Village!!!

That name is a freaking joke. I went once and spent $200 on a meal for two. It was toward the end of the night. The food was okay, but nothing noteworthy. The waiter stood near us as if he was a guard in a prison, watching every bite we took. Weird experience. I wonder if it will be owned by the same people? The EV is going down hill. Sad :(

Totally stupid name, really really bad, unless they're joking. I hope the owners will please change it before they open

"Pardon my French" has got to be the most absolutely ridiculous name for a restaurant that I have ever heard. There is enough serious consensus here amongst these EV Grieve comments that the owners would do well to consider this to be free branding consultation! So, there you go: CHANGE THE NAME!!