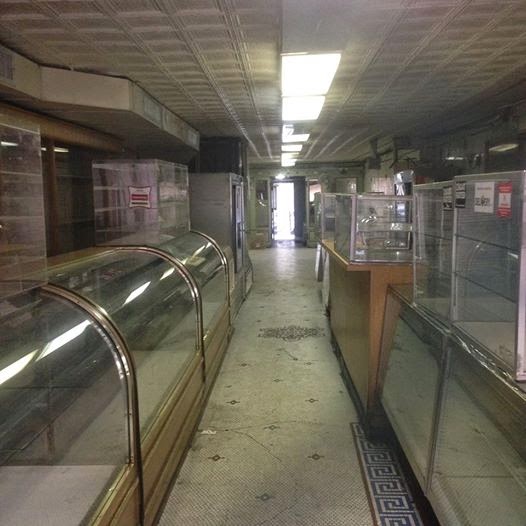 [Photo from earlier this month by Ali Smith]

As you probably know, the owners of Black Seed bagels are opening a location at the former De Robertis Pasticceria and Caffe on First Avenue near East 11th Street.

Noah Bernamoff and Matt Kliegman, the owners of the popular Montreal-style bagel shop on Elizabeth Street, have maintained that they will keep as much of the former tenant's original architectural elements intact as they can.

In an interview at Off the Grid yesterday, the two reiterated their preservationist commitment.

In general, the pair say their goal is to bring back as much of the early-20th century material and look as possible, while removing some mid- and late-20th century fixtures – like the front display cases and shelves behind them. “We discovered beautiful old brick walls behind there,” Bernamoff said. He asserts that the tin ceiling, hand-cut wall tiles, round “penny tiles” on the floor (which aren’t made anymore) are all staying – but where those elements are missing or damaged, they will not be replaced with facsimiles.

“It’s better to leave what’s there than try to recreate it,” Bernamoff said. “We want to have it feel old, and have it feel historic … If we try to recreate [vintage elements], it will take away the specialness of some of what is there. We don’t want to create confusion. We want people to recognize that the space is 110 years old.”

They also plan to keep the neon De Robertis sign on the façade. 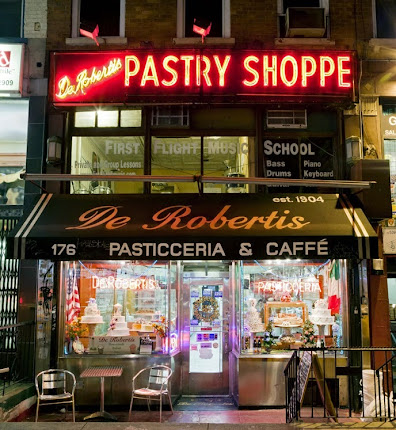 Said Bernamoff, “We prefer to keep the neon as intact as we possibly can without misleading people.” So they may just keep the Pastry Shoppe part illuminated, for example.

The 110-year-old DeRobertis Pasticceria and Caffe closed this past Dec. 5 after 110 years in business.

174-176 First Ave., home of DeRobertis Pasticceria and Caffe, is for sale

Let's take a look at the DeRobertis in-house bakery

Looking forward to checking them out. It's refreshing to see a business move in that's interested in repurposing and preserving a piece of neighborhood history rather than annihilate it.

I wonder if DeRobertis preserved the space of the place that was there before them?

I'm also really forward to this opening. I like having several more quick-serve options in the neighborhood

Very respectful. While the corny lemming followers at their other location prevent me from even trying a bagel because I refuse to wait that long for a bagel, I think the owners are on point and I appreciate this respect and understanding.

Is that Russ from Russ & Daughters?

Thanks to the people behind the new establishment for trying to preserve what they can. I realize they can't save everything, but it sounds like they are saving a lot, and I will definitely patronize their business to show my appreciation.

"I wonder if DeRobertis preserved the space of the place that was there before them?"

Judging by the age of the building, they were probably one of the first tenants in that space if not THE first. But your poor attempt at trolling is much appreciated.

They sound like their heart is in the right place. I'm hoping this works out well for everyone.

It's amazing that there is anything left to be preserved. Given that most of these tenements are more than 100 years old, there has been a lot of interior demolition over the years, but DiRobertis is the rare space that stayed remarkably unchanged in so many aspects over the years. It is a real treasure.

Year of the Sheep every year in the EV and LES.

"This? This is worth that much, and it only tastes ordinary?"
http://www.boweryboogie.com/2014/07/dont-believe-hype-black-seed-bagels-just-ordinary/

Bathroom (urinal) is the best thing in there. Hope they keep that.

They opened a bagel shop 1 block from another bagel shop. They're not good people. I'll never go there.

I sorta like those display cases. Wish they would keep them. Anons. 10:42 and 11:24 - seriously? Leshko's and Odessa coffee shops were 5 doors away from each other for decades, offering similar good cheap food to the neighborhood. It would have been a loss for all of us had one of them not been there, and I doubt either the Leshko family or the folks who owned Odessa thought that the other place was "not good people" because they were so close together. Little Italy is almost nothing but Italian restaurants. Chinatown is majority Chinese joints. So are they all "not good people" because they have the audacity to open in a vacant storefront near similar establishments? Yours are truly two of the stupidest comments I have ever read on this blog, and I've read a lot of stupid stuff. I guess you would have preferred another bar that would have gone in and ripped out the interior, just so TSP Bagels would not have any competition.

Agree with Gojira 100% DeRobertis and Veniero's were across the street from each other for over 100 years and did just fine. The reason they both survived for so long was they were different and offered the neighborhood their own unique style. Same goes for all the Indian restaurants on 6th St, all the Japanese restaurants around St. Marks Place. If anything we have a massive bagel shortage in the area and this will just get help to get more people eating bagels.

Anyway TSP is a whole Avenue away. Black Seed and TSP will be much futher apart than Davids Bagels and Bagel Boss which have been just a few doors away from each other for years with no problem, and I'm sure Black Seed they will offer very different kinds of bagels and food.The only question is which one will have the longer lines on the weekend?

Like the sheeple who would be patronizing this would know or care about the history of the interior. They'll be coming here because it' s another place to be seen. They must as well serve Kool-Aid to feed the masses. Even the naysayers, Giovanni, Gojira, Notorious, have been Black Seeded.