The breaker pop heard 'round the neighborhood 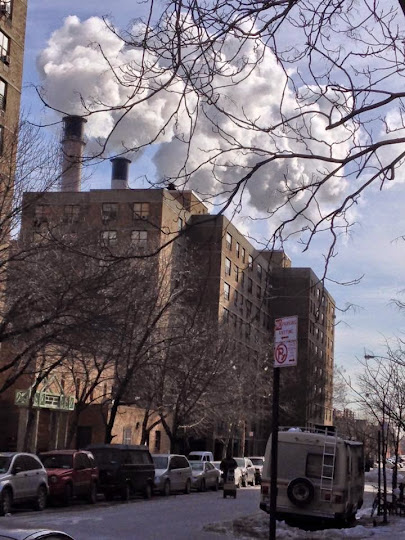 We talked with several people about the noise/bang/pop/explosion at the Con Ed power plant and subsequent flicker in the power on Saturday night... it didn't go unnoticed (as is usually the case) ...

The Villager talked with Con Ed spokesperson Sidney Alvarez to see what happened at the plant on East 14th Street and Avenue C.

“Basically, in a nutshell, we had some equipment malfunction within our facility. In a nutshell, a breaker popped — and the cause was freezing rain.”

The Fire Department responded but there was no fire, and there were no injuries, Alvarez reported.

The spokesperson didn’t disagree that East Villagers had likely heard a thunderous bang.

“I’m sure they would have heard something,” he said.

As for a white flash in the sky, he said, there was no information regarding that in an internal report he was reading from, but he didn’t deny that it could have happened.

“But there was no fire, no spark,” he noted.

Previously on EV Grieve:
East Village residents ask: WHAT THE HELL WAS THAT NOISE LAST NIGHT?

Con Ed making strides so that the East 13th Street substation doesn't explode again
Posted by Grieve at 10:05 AM

I noticed the power blink - I thought, oh crap, its Sandy all over again, but Con Ed came through and I could use my electric tomato peeler uninhibited.

"...Because our equipment is designed to work well in sunny weather, perhaps even in a gentle breeze, and occasionally during a light sprinkle. But we never anticipated freezing rain. It's just not something we plan for..."

Now that you mention it, I thought I saw lightning Saturday night but then didn't hear any thunder, or other bang. Don't think the lights flickered in my apt, but a definite flash outside.

I don't think they are anticipating another Sandy, either.

I also saw the light flash from the street on E. 9th--I thought it was thundersnow, but I didn't hear any thunder or bang.

I actually caught a brief flicker of the overhead chandelier and said to myself...what was that? But life went on uninterrupted....except for the noise from the drunken kids on Second Avenue.

I didn't hear the noise, but I did notice the flickering. I wondered what was up with that.

It's only the new people getting ready to move into those new lux developments going up over there who are confused by the sounds of the frequently exploding Con Ed plant.

In addition to Con Ed's free electricity giveaway each winter, every year around this time they manage to throw in a few barbecued puppies from the stray voltage in the pavement, as eight electrified dogs and their owners over in Brooklyn Heights are now finding out:
Stray Voltage on Pineapple Street?)

We are also very lucky to get this free annual Con Ed fireworks and light show. The exploding manhole covers are just a little bonus. Enjoy!

I was watching SkyNews's old documentary about Hurricane Sandy JUST AS OUR LIGHTS FLICKERED. Uh yeah, as you can imagine it freaked me the hell out and I was glad nothing happened after that.

The operative word here is nutshell

I was using my new electric Sunbeam hoof cleaner, prepare snacks for foodie friends, when I saw what appeared to be lightning and then the hoof cleaner's motor slowed down for a second.