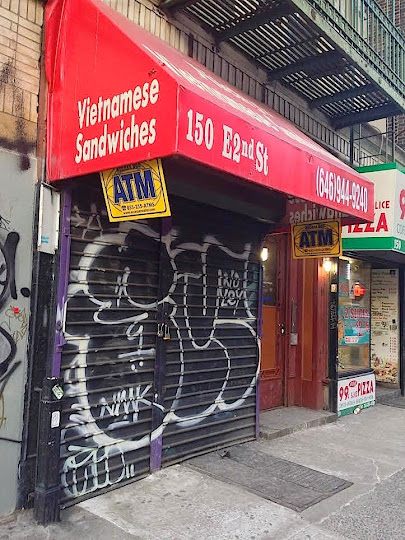 Anyway, we haven't seen the place open in about a week. There aren't any "closed for renovations" signs up on the gate or any outgoing voice messages.

Perhaps they are just on a late-winter break?

The folks at the all-new Nicky's said that they are the original Nicky's.

HOWEVER. We later emailed the family who ran the original Nicky's (and who still have two restaurants in NYC). Here's what they had to say:

"No. They are not the original Nicky's. We only have two locations now. One in the Financial District and one in downtown Brooklyn."

A family member said that they are aware of the name use here, but that it was OK.

We never thought that the new Nicky's was as good as the old Nicky's. Maybe others thought the same.
Posted by Grieve at 4:49 AM

Email ThisBlogThis!Share to TwitterShare to FacebookShare to Pinterest
Labels: Nicky's

Lunar New Year? Maybe they're trying to figure out the difference between a goat and a sheep, although all mammals look pretty much alike to me.

Tried to meet a friend for lunch there on 2/12 and it was closed then, too.

Substitute "NYU students" for "mammals" and I am right there with you, DrG -

Lunar New Year for sure.

If you are a known and loved business, you cannot just let someone else D.B.A. your name. C'mon!!!

I preferred both Nicky's and Vicky's (and could never remember which one was current) to other banh mi joints in the neighborhood. Their pickled vegetables had daikon or some other radish in addition to the cucumbers and carrots. But yes, they were closed last week when I tried to stop by for a sandwich. Hope it is temporary.

I don't remember exactly when it was, but 2-3 months ago it changed ownership again. I went in and a couple of women I didn't recognize were working there. After placing my order, I watched them stumble around and openly discuss how to make the food. I asked them and they said they were the new owners as of a few weeks prior. My order came out really off/bad and I haven't been back since.