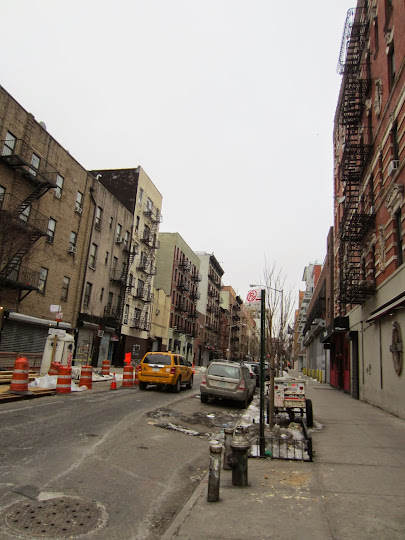 For starters, workers have prepped the former Peter Stuyvesant Post Office for demolition, as we've been reporting. 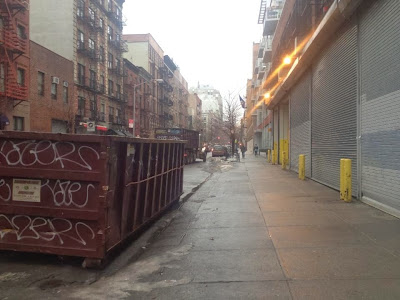 As previously noted, an 8-story retail-residential building will eventually rise here. The residential entrance will be on the East 13th Street side. The project is awaiting city approval.

Across the street at 444 E. 13th St., the ground-floor space where that brick wall currently resides ... 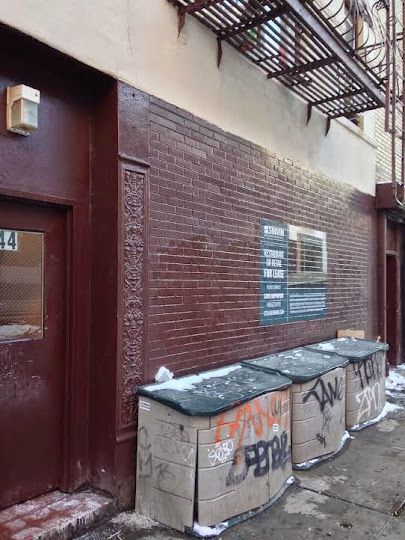 is being marketed for use as retail or a restaurant… 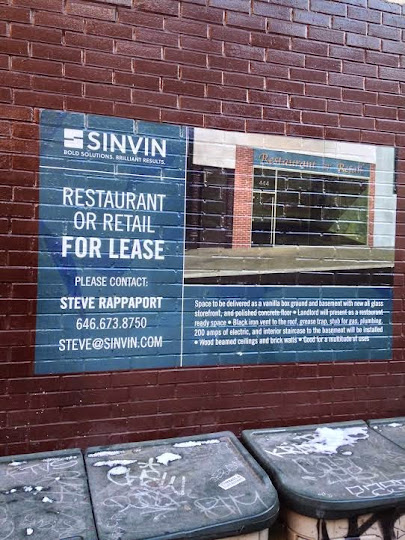 According to the listing, the "Landlord will present as a restaurant ready space." The asking rent is $10,000 a month.

The city approved the work on the new storefront space on Tuesday, per DOB records.

And then we have the garages on the block. As The Commercial Observer reported last month, developers Amirian Group and Bridgeton Holdings bought both properties — No. 436 and 442 — for $9.5 million… 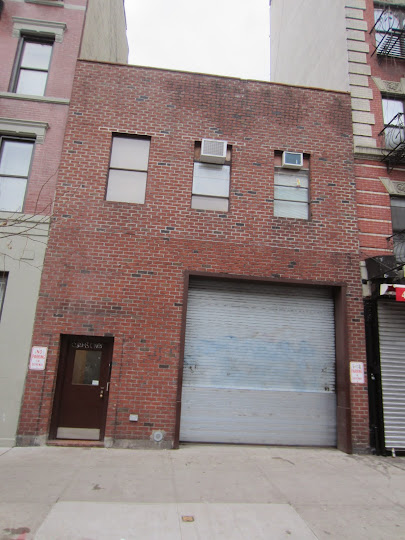 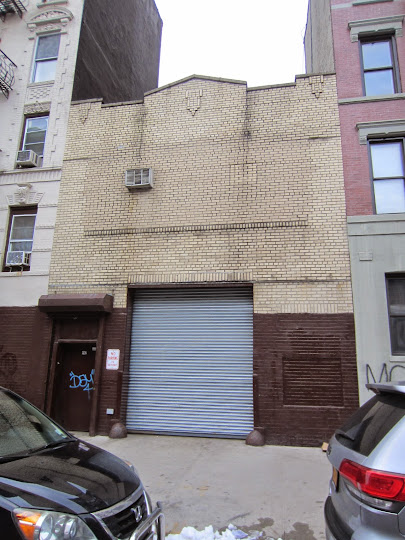 Coming soon: Two 6-story luxury condos (one residence on each floor). Each building will include garages, balconies, roof decks and fitness centers. (Bedford + Bowery, who first reported on these developments, has more details here.)

Perhaps the influx of new residences will put an end to revolving door of restaurants, at least at 432 E. 13th St.

The view from my apartment on E12 Street faces north overlooking 442 E13 St. This two-story building has always been a mystery to me. There is an enclosed structure on the roof of indeterminate purpose. I always suspected meth lab or secret government lab as there's a serious air conditioning system (three exhaust fans) and the facility was protected by anti-crime lights (I could set them off by movement at my windows). It used to throw off a lot of smoke, which stank, and the exhaust fans made a lot of noise all night, though the activity seems to have abetted the last year.

I am sad to see these garage building go, I have sweet spot for simple 1920's era buildings that are not skyscrapers. More than any period style of building these simple, modern building are being wiped out in the city along with light and air which benefitted nearby residents. 13th street has always been a dead block even with the construction of the "A" building nothing really changed. I imagine the building replacing the post office will not be good quality since it is aimed at just out of college young professionals.

So more luxury condos with asking prices in the millions? I know these sell but is there truly no market for anything less? I can't be the only person looking to buy who cannot afford $2M plus for a full floor "luxury" pad, but can afford $600-800K. Currently there seem to be no developers anywhere in Manhattan, BK or Queens appealing to people who are not tax exiles, trust funders, or finance d-bags.

Eventually NY will be a "ghost town". Many of the people buying these luxury apartments are not US residents. Billionaires are buying apartments just to use them on occasion. There are many rich people in the world. They buy the apartments, visit occasionally, otherwise they are empty. Not good for the neighborhood. When you walk around, look at the windows not many lights on in the buildings that are supposedly occupied.

And all of these buildings with rooftop party decks. Great if you got em, hell if you face them.

Yeah, this is a sorry block for luxury apartments. Suckers!!

One would assume that if the EV/LES was/is so 'desirable' it would be left as is with maybe a few structural improvements here and there. What's the point of liking a neighborhood so much that you want to live there and change it all. That's like wanting to live in the forest because you like trees and building a huge brick mansion and parking lot in the middle of it.

Continued demand for luxury condos drives up land value and so developers will continue to build them until demand levels off or, even better, goes south.

That's right, Ken: these "luxury" towers are the projex of tomorrow.

On February 19, 2015 at 9:06 AM, Anonymous said...
I am sad to see these garage building go, I have sweet spot for simple 1920's era buildings that are not skyscrapers. More than any period style of building these simple, modern building are being wiped out in the city along with light and air which benefitted nearby residents. 13th street has always been a dead block even with the construction of the "A" building nothing really changed. I imagine the building replacing the post office will not be good quality since it is aimed at just out of college young professionals.

It just occurred to me they look like they might have been carriage houses at one time, and therefore older than the 20s. If this were a truly residential neighborhood like Brooklyn Heights, people would be buying them up for 1- and 2-family houses; unfortunately, the land in this neighborhood is too valuable to let it go for that.

And the really sad thing is the quality of all new construction is true crapola; it's just $hitrock, with walls so paper-thin you can hear through them. Welcome to New York; we've been waiting for you!

All of this can be prevented by the city not changing the zoning to allow for it. If zoned to remain as a one story building, the property has a lesser value with lower taxes, making it easier for an owner to keep it and keeping it undesirable by real estate scum who want to build on the site.

This would not just save former carriage houses, but gas stations and other businesses that serve communities.

The city is facilitating the destruction of New York City, one property at a time....