The Adele has a shuttle van 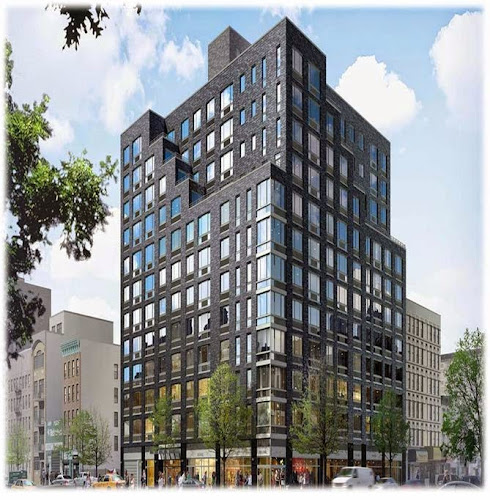 The distance from a subway line might be a deterrent for a potential tenant. Which is why, perhaps, there have been multiple sightings of an alleged Adele shuttle van in recent weeks.

Said one EVG reader, who has been keeping tabs: "I just saw the Adele subway shuttle again. Pretty sure that's what it is. The van was filled with seats but no people driving east on Bleecker. After a drop off at Broadway-Lafayette I presume. Oy vey. That's so Trump Plaza of them."

And finally Dave on 7th recently caught the Adele van in action... 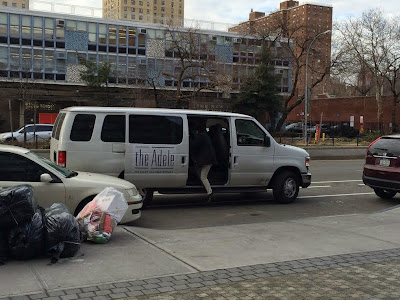 A shuttle service isn't listed under the Adele's amenities on its website… and the van doesn't offer any further explanation about the Adele's puzzling marketing slogan: "In a city where everyone is always going somewhere, YOU'LL ALREADY BE HERE."

Email ThisBlogThis!Share to TwitterShare to FacebookShare to Pinterest
Labels: The Adele

Also, not official, I heard that the woeful crooner Adele is giving tenants piggy back rides into SoHo.

First they rigged the address for marketing purposes to 310 East 2nd St. to disguise the fact that the building is all the way over on Avenue D an Houston. It's so Far East you might as well be living in East River Park, or Asia for that matter. Much like the old East Village there aren't too many cabs passing by, and almost no public transportation.

Thats ok if you live and work in the neighborhood, but most of these types are "going places" both day and night. You thought we were just joking when we said they would need an armed escort to come and go to the nearest subway or grocery store? Especially late at night. Now they slap a sticker on a van. Does that ride include in-flight dinner service?

I bet the developers who just bought 50% of the Campos Plaza housing projects for close to half a billion dollars won't be offering a private shuttle service to any of their current tenants, at least not until they can find a way to evict most of them and convert it all to market rate.

Is it legal to photograph people at a cafe without their knowledge and use them as marketing? That's what they're doing in the "neighborhood" section of their website. I know Stuy Town got into a LOT of trouble for doing something similar.

Don't they know they're right across the street from one of the most frequent busses in the city, the 14D? I mean, if they're OK riding the subway, why not the bus?

The 14D is the worst bus in the city. And if someone wants to pay tons of rent, that's their business. You get what you pay for and that includes free transport to the subway.

The 14D bus is 14 stops to Union Square, count 'em. By they time they get to Whole Foods and back all the brie would be completely melted.

The bus? Are you serious? People in luxury housing dont ride the bus. They need a private bus to keep the poors away. The bus...SMH you have got to be kidding.

Kind of ironic that these lux lifers are commuting to work day-laborer style in a van.

Shuttle? Whatever happened to their beloved greenwashing godsend Citi bike sharing machine? And why do they need a shuttle? Don't the residents hardly leave their luxury condos since they do most of their shopping and entertainment in the matrix and have everything delivered to them? PLUS, they'll always have Uber.

Why not just transport these suckers around in a rickshaw? With goats! Can't forget the goats! The hooves will come in handy for fro-yo.

Lol, all of you malcontents crack me up.

Does the trash pictured travel in the luxury can with them?

LMAO, The Adele's residents are malcontents. They need a shuttle to go to the subway station.

Anonymous 3:40, You make a good point. The people who thought Citibikes were luxuries for rich people were wrong.

They need the shuttle so that they can go to the NYSC on Ave. A where they can walk on the treadmill instead or cycle on their spin bikes.

Hope they have direct non-stop shuttles to and fro Bagel Seeds, them Boys of Biscuits, Brothduh, brunch places... and hope they are running shuttles frequently on weekends so that they can have the self-illusion that they are special and selected residents and can have first dibs on the unlimited mimosa marys before the bridge & tunnel crowd comes in; and afterwards they can go straight to bed without having to be with the masses on the mass transit.

"In a city where everyone is always going somewhere, YOU'LL ALREADY BE HERE."

Sounds like a variation of the old housing slogan: "If you lived here, you'd already be home!"

So the Adele is a home for senior citizens?

Hello, my name is Adele. Y'all are just jealous.

With traffic, you could prob walk faster to the F train - it's only an 8 minute walk?? And I live on the corner, there are TONS of cabs and ubers and contrary to other posters, the 14D runs every 5 or 6 minutes and the M9 bus on the other corner goes to Wall Street through Chinatown in about 20 minutes. So there are plenty of transport options - including citibike.