The search for Sugar, the missing East Village dog, continues 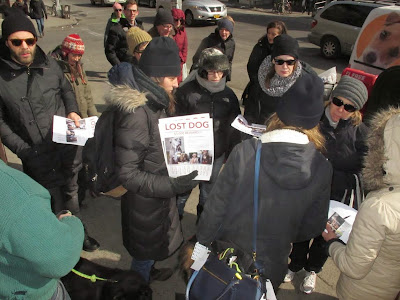 Dozens of volunteers gathered this morning on Second Avenue at East Fifth Street to help look for Sugar, the Amstaff/pit bull mix that went missing this past Monday. (Volunteers have come together several times this past week. This map shows where people have posted flyers throughout the city.)

Sugar's owner is an East Village resident. Sugar went missing while she was in London on business. Her dog walker of several years reportedly had some kind of "psychotic episode." No word on where the dog walker is now.

The story has received plenty of media coverage … on WABC 7 … NBC New York … and Fox 5, among others…

There are Twitter and Facebook pages now devoted to the search. There is also a $5,000 reward for her return.

Previously on EV Grieve:
More about Sugar, the missing pit bull mix with a $5k reward (55 comments)
Posted by Grieve at 12:54 PM

It's time to think outside the box. Can a search party go with police escort to the drug dealer's neighborhood? This is how Sugar will be found. Imagine yourself for a moment to be that drug dealer who is holding this dog. You are paranoid for so, so many reasons, not the least of which is that your apartment is a pharmacopeia of illegal substances. Now, you also have in your possession the most searched-for lost dog in Manhattan. Paranoia to the Nth Power! A door-to-door search must be done, because this paranoid person is not about to emerge from his/her lair only to be spotted with Sugar. Think like a shadowy figure! Then and only then will this sweet dog be reunited with her family.

I'm glad the media is picking up on the story. I scrutinize every dog I see that looks like Sugar hoping it's her. The photos of her markings are helpful. I hope this nightmare ends soon for the owner.

Does anyone else think this story about the dog walker's "psychotic episode" sounds fishy? To quote Judge Judy "when a story doesn't make sense it is most like not true".

Who gives a shit about the dog walker? It's a moot point.

Dear st Anthony please come around. Sugar is lost and must be found.

Manhattan is an island. There are only so many places that the dog can go. She likely would've tried to find home or a park - certainly a familiar place.

The whole city is looking for the $5000 dog but not a trace.

I hope this turns out to have a happy ending.

If the dog walker is responsible for losing this woman's dog then why has he not been arrested for losing her property? I don't believe this story as it is reported so far. I know this doesn't change the fact that this dog is "missing" but I get the impression the truth is not being told by those involved.

Anon. 1:29: what drug dealer? Does this allude to someone taking the dog? I'd love to read more. There must be a police report someplace, right? Why hasn't more detail appeared about why the handler was on 26th Street? Is that close to Sugar's home? Has there been any effort to obtain security camera footage from near Sugar's last known whereabouts? Why does the daily search party congregate in the East Village? That's nowhere near E. 26th Street. Has a credible lead come in that leads Sugar's owners to focus the search around there? Yes: if it were my dog, I'd go door to door, which might take forever, but who cares? My guess: more than one person knows where Sugar is. I hope conscience moves somebody to get Sugar home, and soon.

@11:32: Sugar's owner lives in the EV. She was in London for work when this happened and Sugar was staying with the dog walker at his apt on 26th st. It is unclear whether he was on drugs or had some sort of mental breakdown, and it is also unclear why his identity is being withheld from the public - I'm guessing it is because the details of Sugar going missing are still very much unknown and they don't want to persecute this guy for losing her if in fact she was stolen somehow and his "breakdown" was a result of the trauma of losing her. Several of his acquaintances have posted saying that he was absolutely not a drug addict and that he really loved this dog. Unfortunately as a result of whatever happened to this guy, he apparently has no memory over a 2 day period during which time this happened. There are pet detectives involved, they have been reviewing video surveillance, interviewing doormen, delivery men, taxi drivers, etc. It has been on every local news outlet. And just this morning the reward was increased to $10K when bball player David Lee pledged to match the orignal $5K. They are really doing every possible thing they can to find Sugar!

To get you up to speed http://bedfordandbowery.com/2015/02/vegan-clothier-says-her-dog-was-lost-after-her-dogsitter-lost-his-mind/

Why is everyone looking in manhattan only for sugar?
What about the other borrows?

St Francis please help. Do not let sugar disappear, help him return home to his owner.

here is the other string for this story on this same web site:
http://evgrieve.com/2015/03/reward-for-sugar-is-now-10000-thanks-to.html

Can't wait to wake up to the news of Sugar being home SAFE and reunited with her wonderful owners. This story is completely devastating. My heart goes out them. Praying and sharing this story here in AZ! We all have fallen in love with this beautiful dog<3