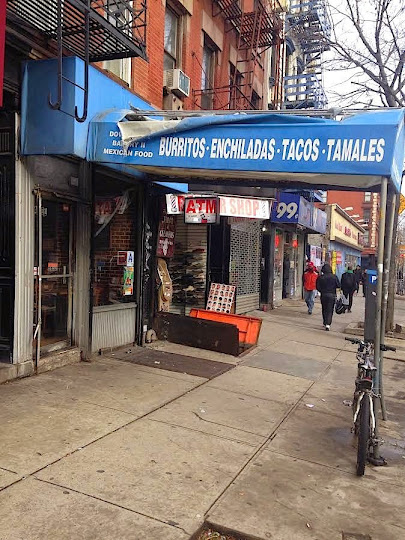 • B&H Dairy at 127 Second Ave. between East Seventh Street and St. Mark's Place. "Since 1947 it’s been catering to dieters, vegetarians, and cheap dining enthusiasts, who fill up on a bowl of soup and buttered challah bread made right on the premises — it threatens to overshadow everything else."

• Downtown Bakery at 69 First Ave. between East Fourth Street and East Fifth Street. The restaurant "serves an all-Mex menu of cut-rate burritos, breakfast tacos, enchiladas, chilaquiles, hard- and soft-shell tacos, and other quick grab-and-go delights, many with a Pueblan flair."
Posted by Grieve at 9:00 AM

I never understood why people would sit elbow to tight elbow on a counter in a mediocre place, like B&H or Stage. Of course, they have the prerequisite numbers of years of EV residency, but the lunching / dining experience in cramped quarters never appealed to me. As always, just my 2 cents.

PS: I do love Downtown Bakery, because one can call in an order and then pick it up 15 - 20 minutes later. Which is exactly what I do.

B&H is solid. Downtown Bakery is a true godsend. Great food and very kind staff which leads me to believe that in current day East Village means they will be forced out by a greedy landlord and replaced by another bank ATM kiosk.

Plus B&H is a wonderful, cozy scene. Warmth and authenticity make my basic grilled cheese taste like heaven any day.

shhh about Downtown Bakery. I've seen enough bros getting their hangover burritos there.

i like paquitos more than downtown bakery. and there's no one ever there

peace & love will always trump all. everyone & anyone has the right to say,feel and think what they want. smile for b & h. smile for the downtown bakery. enjoy them while they still operating. enjoy yourself while you still alive. the sun comes out for everyone. both of these establishments deserve the respect and support from they're local government if need be. go and support your local business and get involved in your local government. peace