Manitoba's is in danger of closing on Avenue B 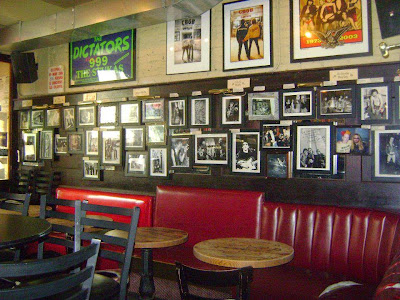 Handsome Dick Manitoba and Zoe Hansen, owners of Manitoba's at 99 Avenue B, shared the following letter with us last evening... (slightly edited for length)

Since January 1999, Manitoba’s has existed and thrived as one of the last great New York City Rock and Roll Bars, with a sub-specialty in Punk Rock, a casual bar to enjoy a few drinks, watch a game, play a game, or have a lovely conversation with a member of our wonderful, unpretentious staff ... and listening to Johnny Cash, The Stooges, The Beatles, The Ramones, and The Dictators, for example. 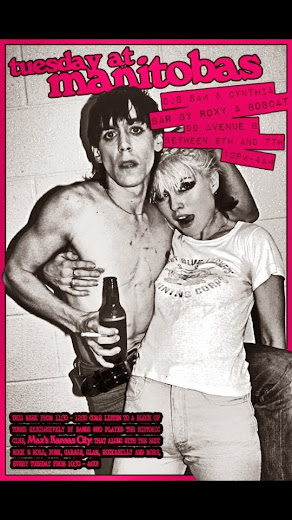 Sadly, this East Village landmark is now in danger of shutting down.

Due to a small wrinkle in the interplay between State and Federal law, Manitoba’s was recently forced to reluctantly settle a case with a private individual for a cumbersome amount that threatens the future of the establishment.

Our backs are against the wall. Our ONLY choice, after being advised by several very competent lawyers, was to settle.

Manitoba’s, its proprietors and patrons, are the very fiber of the East Village — the same East Village that is now being commoditized at an alarming rate and manifesting itself in the form of tenants in expensive apartments levying noise complaints at 8 pm.

This is a battle cry for help. Please don't let Manitoba’s meet the same fate as other business institutions that have recently been forced to close.

Understand this please, this situation is not part of what you would call, "business as usual." It's not a fine, and it's certainly not business mismanagement. We either pay, or shut down. Not one penny goes into the owner's pockets, or is being used to pay bills. All of it goes to settling this claim and keeping the bar open.

There will be auctions, concerts and donations. Every donation — no matter how small — will greatly assist towards keeping the lights on, the beer cold and the jukebox playing.

We'll have more information on the situation here as it becomes available...
Posted by Grieve at 5:15 AM

Manitoba's problem is there is only 1 bar. If there a half dozen, then authorities wouldn't be able to pinpoint the noise easily, and the chef would be SOL. Thats what DEP tells us about 6th Street. To get a noise complaint, it must be resolved easily. otherwise, DEP walks away.

Unreal. Just move to another apartment, it's not like this block is prime real estate with "surreal" views (sorry, had to) of the East Village. They've clearly demonstrated they've tried to placate the doctor by getting rid of live music and having the jukebox turned down after 10. Is that not enough? He's got to suck them dry with a lawsuit and post their heads on a stick in the front yard? Great karma doc.

correction..chef. had my coffee now.

I once lived above Manitoba's. Bought my place before Manitoba's moved in. My walls and floor would shake until 4am. I too called to complain about the noise. No one ever asked to test sound in my apartment. If they had, Handsome Dick would no longer have a bar. Good for you William. No one should have to live with that noise.

Is noise good? Or bad? Does noise reflect the "end" of the EV? Or does silence?

I get so confused.

Also, I'm curious about this lawsuit that has KO'ed Manitobas. It's gotta be over more than just noise...

“This is typical of the new East Villagers who buy expensive little apartments over a bar facing Avenue B — he wants to be in the cool EV — but don’t want to really deal with the people who have been the very fiber of this neighborhood for almost 30 years,”
I couldn't agree more. For over 2 decades I've lived in this vibant, interesting neighborhood. So much so, we've attracted the type of folk who want to spoil the tapestry for their personal satisfaction. Sorry chef, did you not notice a punk bar when your real estate agent showed you a spot on Ave B?
Yeah, a little bitter. I get that NYC is a living, ever changing entity, but let's at least keep it interesting. I don't want a neighbor that closes down a great, local establishment and gets a pay out. Please move. We have far too few classic business left, and way too many douche bags.

What is "a small wrinkle in the interplay between State and Federal law"? This is a huge detail left out of this article. Please give an explanation before we give a donation.

Is this building a coop or a rental? I imagine a rental since a coop would take action against the bar and it would not be the responsibly of one tenant to engage the bar owners.

I could not imagine living over a bar personally although it appears that the owners made a sincere effort to dampen the decibels it may have come too late in the already stained negotiations.

For those that think this is the EV and anything goes, screw your neighbors if they complain they can't sleep must obviously live in buildings without ground level live music. As a resident of the neighborhood for 33 years I have to say I don't remember a time when the EV was as loud as it is today. Clubs in the past were located away from crowed residential blocks and those that weren't were in buildings where people were squatting or paying $150 per month in rent, I know because that was my rent back then.

If the angry tenant gets his way and Manitoba's has to close, I'm sure he'll be thrilled when the 7-Eleven takes the space.

His victory dance will be short-lived as soon as he discovers that they take deliveries from large and loud idling trucks at 4am.

Someone let Jimmy Fallon know, maybe he'll bail it out. This is his favorite bar.

Sorry, but if the noise complaint involved some douchebag frat bar, the reactions on this thread would be very different.

RiderofTree said...
So true. I don't live in NYC, but I can tell you that this crap is happening everywhere. I've lived in the same neighborhood in a college town for 15 years and pretty soon I won't be able to afford it anymore because f=ing yuppies who wouldn't have walked down my street 10 yrs. ago are taking over and building absurdly large homes and letting their dogs shit in my yard. I've already watched several people forced out who'd been in my neighborhood for years. It was a decent place for lower middle class people to own/rent small cottages or rent affordable duplexes. Those days are over.
Feel for you....

As for me, you are correct. If this was just any bar, I wouldn't be saying anything. But it's not a santacon bar, it's Manitoba's.

Wait, I thought bars were bad, and people who drink after 10pm were awful people? Isn't that what is said about bars in virtually every other f'n thread here about bars?

This is just so schizophrenic. Anyway, the next time you want to plug the LES Dwellers, this is the kind of shit they want and support. They want downtown to look like and sound like the UES.

I had to laugh when I read "the same East Village that is now being commoditized at an alarming rate and manifesting itself in the form of tenants in expensive apartments levying noise complaints at 8 pm."

I have lived here nearly 30 years, and it isn't only the wealthier folk complaining about the noise. The bars have gotten out of control in the last decade or so and none of us--rich, poor, or somewhere in the middle should have to put up with it. Spend the money on soundproofing and keep the noise to a respectable level.

I've been following this case a bit. But I'm not sure exactly what the "cumbersome amount" is for, or to who, or for what.

Did Huffman sue and win?

"It's not a fine, and it's certainly not business mismanagement. We either pay, or shut down."

Ken nailed it. If this bar catered to NYU 'bros' and 'sorostitutes' you'd be planning a block party. If Manitoba wants cash he ought to explain what the deal is. Did he do/say something that caused the lawyers to tell him he needs to settle this lawsuit? If you are 100% right and have good legal standing why would you settle for what apparently is a lot of money. How much money are we talking about here? How does a noise complaint from a neighbor involve the interplay between state and federal law? Did he say something on his radio show that he wishes he hadn't? Is that how federal law comes in? Does this involve libel/slander or something similar? Did he screw up big time and now he's essentially begging for our cash to pay for his mistakes? Hope that's not the case because that would be sad. I tend to limit my cash donations to the Bowery Mission. If Manitoba is a rock 'legend' and long time business owner- doesn't he have insurance or savings or something to cover this? And commenters please decide which noise is good and which is bad. Please be consistent. One post has neighbors upset about noise. Now you seem to think its ok. Make up your minds.
Its easy to assume the neighbor is 100% wrong here. Maybe he is but without the full story its hard to tell.

Pyramid is in a residential building. NoTell Motel was in a residential building. So were many EV clubs going back to the 1980's. They were mostly located on the avenues but some were located on side streets.Manitobas is on an ave. It is absurd to go after one of the few classic neighborhood bars on the basis of noise. Anyone who moves to NYC expecting peace, quiet and fresh air is nuts. And finally, the landlord knew he was renting to a bar. He, (not the bar) is responsible for any effect that has on his tenants.