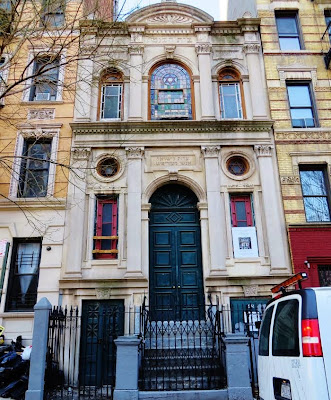 [Photo from April 2014 by Bobby Williams]

The landmarked building between Avenue A and First Avenue was in disrepair and the congregation's population had dwindled. Synagogue leaders signed a 99-year lease with East River Partners worth some $1.2 million. The renovations include a penthouse addition and an elevator. The synagogue will reportedly retain space on the ground floor for their use.

The Daily News offered up a few more details about the plans here. For starters, sales for the three units will commence this fall, though developer Jody Kriss of East River Partners declined to discuss pricing.

In addition, East River Partners are planning "to pay an annual maintenance fee to keep the shul running for 200 more years."

And what about the controversy regarding the condo conversion when the plans were first announced?

"Back when we started the construction, people would curse me out," Kriss added. "But when they found out that we were preserving the synagogue, and not demolishing it, they wanted to shake my hand, instead."

Stained-glass windows removed ahead of condo conversion at Congregation Mezritch Synagogue
Posted by Grieve at 4:55 AM

I've visited this shul a few times. While it has lovely history and nice facade, it's a death trap for this old group of congregants. If they're getting a brand new space out of this, it's one of the few good renovations happening in the neighborhood.

1.2 million is well below the going rate in this neighborhood. I suppose it's a 99 year lease instead of an outright sale, but it still seems very low.