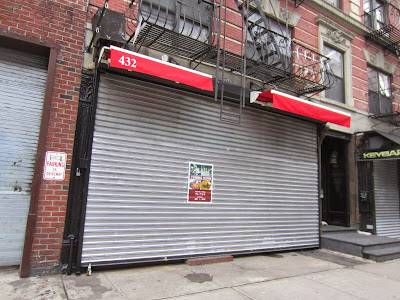 Sembrado’s Tacos al Pastor, the Mexican restaurant from Danny Mena, the chef and co-founder of Hecho en Dumbo, quietly closed this past November at 432 E. 13th St. between Avenue A and First Avenue.

Per their Facebook message last Nov. 14: "Sembrado is moving. We are closing our East Village location … Don't worry, we'll be opening a new location soon!" The restaurant's website states, "expect us on the other side of the river in early 2015."

Meanwhile, the sign is up for the next tenant… Japanese dining featuring sake and tapas... 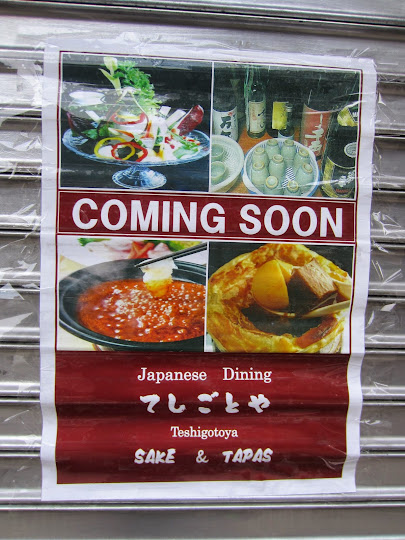 Not sure what the reason was for the closure/move. Too much taco competition in the neighborhood?

Per the EVG reader who told us about the closure:

"It seems to have gone unnoticed that Sembrado has closed. I'm not sad to see this place go. The food was pretty good but it was clear from their bar set-up, which included many varieties of artisinal/specialty tequilas, how their business model was going to work."

This seems like a tough address for a restaurant. The well-regarded Singapore-influenced Masak closed here in March 2013.

This is probably the worst block I can think of to open a business that requires foot traffic to survive. No place seems to have done well here across from the ass end of what is now the former post office. Perhaps when the new 20's apartment building / dorm is built this block's luck will change. The tenements on this block have tenants moving in out constantly. I am tempted to tell the young people standing with the realtor outside to not bother since they will be moving within the year.

I agree; nothing does well on this block. It's rather fugly. I have no idea how Keybar has lasted there so long. I don't count Phoenix because it's basically on the corner and is very well established.

Anyway, I'm sorry, Sembrado. Good luck in your next space.

Agree ... I enjoyed Masak, and I enjoyed Sembrado. A tough spot to make work. Speaking of competition, is there room for another Japanese restaurant in the EV?

At CB3 licensing owners said they will be offering more traditional Japanese cuisine as opposed to sushi.

word, Masak was phenomenal, staff was friendly, great reviews and press... and they still failed. that block blows for that stuff