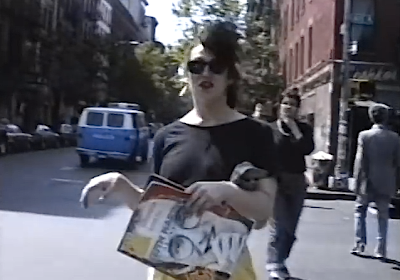 Though the years we've posted some of Nelson Sullivan's 1980s videos, including "The first nice Sunday of 1987 in the East Village" ...

A post showing a lot more of Sullivan's work yesterday at Gothamist reminded us of these. In total, Sullivan shot more than 1,900 hours of tape over a period of seven years. Head over to Gothamist for a lot more of his time capsules of downtown life.

His video archive was donated to NYU's Fales Library & Special Collections in 2012.

'The Fabulous Personalities of 1980s New York'
Posted by Grieve at 5:00 AM

I can't tell you how many times I've stayed up nearly all night watching Sullivan's videos. They're positively wonderful.

I've been watching them all day. The energy of the city was so different back then. Everyone seems generally interesting. Genuine characters. Something that can't be said today.

I don't really see much difference between these videos and today, which is a good thing.

They still haven't installed a curb cut at the southwest corner of 7th and A! I've been complaining about that for years!

What about Spacley aka GRINGO