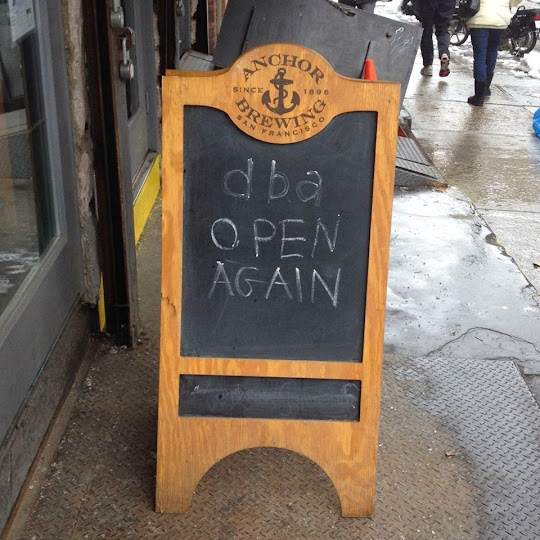 A reader told us that d.b.a. reopened last evening.

The bar at 41 First Ave. between East Third Street and East Second Street closed for renovations in early December.

As previously noted, David McWater is d.b.a.'s new owner. (His other bars include Milano's and Doc Hollidays.)

It was our understanding that the bar would have the same basic look and feel... except for maybe the bathrooms. We'll swing by later to see how it all looks.

Ray Deter and Dennis Zentek opened d.b.a. in 1994. Deter died in July 2011 from the injuries he suffered in a bicycling collison. Zentek died on March 23 from head injuries he sustained in a fall down a flight of stairs.

The d.b.a. in Williamsburg closed for good in late November.

Previously on EV Grieve:
David McWater looks to be the new owner of d.b.a.
Posted by Grieve at 4:43 PM

I can't recall the prices exactly from before. However, the vibe seemed the same early this evening. Wayne was behind the bar. I only stayed for 2 beers. I'm relieved that all seems well here

Could you not call Deter's death an "accident"? That gets everybody off the hook. We still don't know what happened. But from the impact we can say that the driver was probably speeding. So runned down is more like it.

I rarely ever hang out there, because they open too late. But,can you guys who keep bringing up that accident, just quiet down. It can't be good for business.
As always, just my 2 cents.

In 1981, I was run down by a car on 7th street, and at the time it was called an "accident," even though the [young, inexperienced] driver was in all likelihood speeding—judging by my multiple, serious injuries.

My old-school newspaper editor schooled me to call it a "collision." Accuracy matters!

Ray was killed by a car, he wasn't killed by "an accident." Call it was it is.