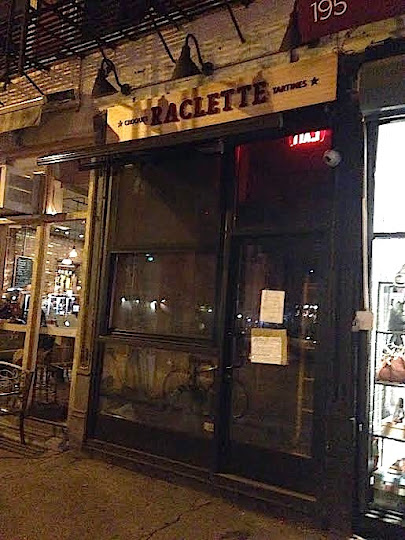 The sign is up for the new tenant coming to 195 Avenue A just north of East 12th Street.

The Raclette sign promises croques and tartines. We don't know anything else about the cafe at the moment.

However, on the April 2012 CB3/SLA committee docket there was a Raclette going for a wine and beer license in the former Jubb's Longevity space at 508 E. 12th St. Those plans never materialized. (And the same name and concept can't be a coincidence.)

The previous tenant here, Brooklyn Piggies, which sold pigs in a blanket, closed in late November.
Posted by Grieve at 5:00 AM

Email ThisBlogThis!Share to TwitterShare to FacebookShare to Pinterest
Labels: 195 Avenue A

I noticed Raclette going in yesterday and couldn't even recall what had been there previously.

That must be the place that was that Little Piggies place for a short time.