And how was your blizzard? 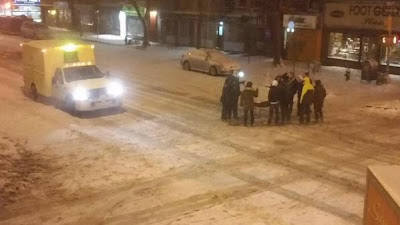 It was apparently pretty awesome for this group of thrillseekers, who, during the overnight driving ban, took to the middle of First Avenue and St. Mark's Place for a game of Beer Pong.

Brandon Wenerd captured the scene on video ... and provided a report to BroBible...

A few Bros take shots on the portable table, a neighbor from a building on the block tells them to shut the hell up, and a emergency vehicles go by (they did nothing to prevent them from passing or anything dangerous). It ends in the way all good beer pong games end: With a slam dunk breaking the table.

The pong dunk happens around the 3:20 mark and right afterwards an ambulance drives down the avenue with its sirens on, causing the Bros to hilariously flee. The Bro leader is quick to call them all a bunch of “pussies” when they realize it was an ambulance, not NYPD.

Time to call in the air strike.

It's official. After years of hanging on for it's life, this neighborhood now sucks.

The storm turned out to be a bit of a bust. Will CB 3 have its meeting, or will they wimp out (as per usual)?

These are the future movers and shakers and possibly leaders of our country, folks. Guess I'll be moving to Belize after all.

where's a giant snowplow when you need one

Thank the viceroy of safety his heinousness Lord cuomo

CB 3 cancelled its meeting due to the venue - PS 20 - being closed. EV Grieve posted that already. Are you able to read?

Honest to God, do some research before opening your mouth.

Finally, what have you done for the community this month. My guess is that you spend most evenings eating Doritos and commenting on blog posts, knowing nothing of which you speak.

Boys will be assholes.

Do you think they all live in one apartment? When the neighbor said 'go home' they all pointed to bldg around 124 1st. That place must be really gross!Stinky socks and empty beer bottles everywhere.

This effectively illustrates everything that's wrong with this neighborhood these days - drunken fratty a-holes running loose in the streets.

Clearly, no one but them exists in the whole wide world...

Time for the bro's to go back to Long Guyland or whatever suburban hellhole they come from.

Just pretend it was an art happening and you would love it.

The only "art happening" I'm able to pretend this being is one run by FIGMENT.

10:17 I'm all for increasing reading comprehension, but you know what else I encourage? Not repeating one's self.

What's worse are the females who keep company with these guys. Really ladies? That's the best you can do?

I wish the police could patrol regularly and ticket these people for being public nuisances. It's incredible what a bunch of entitled white guys can get away with.

The EV 2015 is like college only without the pretenses of education or enlightenment.

Their zookeepers must be so proud.

Looks like a few douchebags got dropped from the clouds along with all the snow.

I like the dry humping moment when one bro tackled another bro and they spent some crotch/ass time together on the ground. Like I always said bros are just a six pack away from gay.

I hate these people with every fiber of my being.

Yes, obviously what's worse than being an asshole is being the companion of an asshole.

You know what's even worse than the companions of assholes? People who call women "females."

If a bunch of non-white folks were to do the same, putting a table in that same corner playing cards or dominoes or just gathered around shooting the breeze, cops would be all over them. Great to be white, eh, Moe?

Women are female (adj.), duh, but it is considered pejorative to refer to women and girls as females (n.), which most civilized people know by now.

This makes me sick. The worst part is they have no idea how utterly LAME and pathetic they are...This is what we used to escape from in the EV.

I'm with Jeremiah Moss. Part of why I moved here way back when was to get away from suburban NJ throwbacks like these douchebags.

I like that the guy who flips the table over is so pleased with himself, strutting around and surely thinking that he's a slick mofo, haha!

Always about race. Typical liberal anti white drivel. I could talk about crime stats and how violent some non white areas are but EV Grieve doesn't like to hear about reality. Whatever.

Really?! You find the word female offensive? I feel so bad for your 4,500 cats.

at least they picked up the cups.

enlighten everyone with your brilliance about non white areas

As usual, criticizing anyone who has any fun.

When speaking of other human beings, using the term "the females" is quite offensive. However when referring to wild animals or to primitive tribes such as these, it is quite appropriate.

Cat lady here, I'd suggest you ask the woman in your life how much they like being called "females," but your mom doesn't have the heart to tell her son he's a mouthbreather.

white is a race? and "female" is offensive? now you guys know why it's a Holiday tree and not a Christmas tree. Welcome to Taylor Swift's New York.

I suggest you brush up on your grammar.

"And don't you ever call my female Holiday Tree "honey," girlfriend!" --Taylor Swift

Yeah I biffed the grammar when I changed my original comment, can't deny that one. But it's the truth: Calling women "females" is low-class and unintelligent (at least now you know?). It makes a guy sound exactly like these beer-pong douchebros we should all be united against!! Now let's stop this pointless infighting and go barricade the frat house at 124 1st Ave.

And it makes you sound like one of their pong wenches.

Female: Don't say female in New York City's edgy East Village or someone will throw a pile of cats at you from the bo-day-ga! Instead, ignore everyone who is not a guy, they'll just slow you down at the bar.

Calm down ma'am! You sound hysterical!

What if thirty or so guys aged 40 and up just came down there one night and just beat the living fuck out of these bros?

If this happened enough times (even as little as ten times) word would get out to these clowns and they'd most likely behave or at least think twice about how they act.

I hate to see what happens when you check the female option on a form...

So much anger against these imaginative fun dudes though yeah, some people do need their beauty sleep. Since when did EV stand for people hating? Is it not based on embracing the quirkiness and wackiness in all of us humans? If anyone came to EV trying to run away from Suburbia then they came in vain as they only face themselves in the mirror each morning. Vanities, all is vanities. (and of course insecurities and self doubt.) Embrace the love at least they were not looting and shooting which if you talk a click to Bowery Boogie was happening down in lower LES.

If beer pong is the imagination at work ...

I was trying to think back to my "bad kid" youth here in the neighborhood. Were we this annoying when we hung out around A7 after a show, or tried to sneak into the Pitt St pool late at night? I'd LIKE to think we were a little more considerate and maybe doing something more ... creative.

But what gets me watching this bozos is that they're just doing it to take selfies of themselves in the snow. Just to record themselves being assholes, not to actually enjoy a winter storm.

And you know they left every cup on the ground....UUGGGHHHH
I hate people who litter.

Post this video next to the word "brotesque" in the new video dictionary?

@ Anon 9:42- What time you wanna meet up at Sophie's? I just found my brass knuckles.