Report: Jukebox-revenue dispute forces the Continental to file for bankruptcy 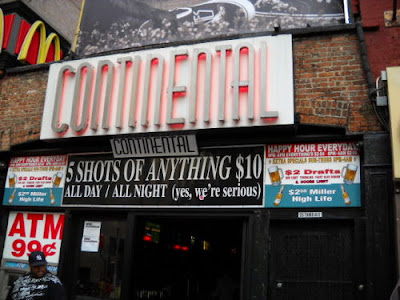 At issue, a jukebox-revenue dispute that "eventually snowballed into a lawsuit that went on for about seven years." The lawsuit ended in arbitration with $49,762.96 awarded to PLK Vending, according to Crain's.

Owner Trigger Smith said that he will "do everything in [his] power to keep this bar going."

After 15 years as a live-music venue, the Continental at 25 Third Ave. near St. Mark's Place ditched the stage for a "classy dive bar" makeover in 2006. As Crain's notes, the jukebox at the center of the legal dispute replaced the bands.

Flashback to an article in The Villager in February 2006 about the venue discontinuing live music.

“It’s sad that places like this are closing, but times are changing,” said Justin Weiner, a 24-year-old real estate financial analyst, who read a newspaper while he waited for his friend’s band, Against the Wall, to play. Now a lot of people hear new music on MySpace.com, not in clubs, he said.

wtf is up with EV bars and random lawsuits? how does any place stay open with this shit happening?

I don't think I've stepped foot in the Continental since they underwent the change into the "$10 for 5 shots" place, but I saw awesome shows there when I was in high school. New Years Eve 1999 with the Devil Dogs and Candy Snatchers was a high point. I liked that it was still there even though it wasn't the same. Sad that it'll be gone soon.

This bar has been a blight on the neighborhood for years. It is the poster-child for a loud space spilling onto the streets. I've never understood how its neighbor, the Cooper Union dorm, did not deluge it with noise complaints.

Last band I saw there was the Toilet Boys. Their pyrotechnics set the ceiling on fire briefly. Was an awesome show.

I don't understand anything about this lawsuit. Normally, a jukebox operator supplies music to the jukebox and collects the money, splitting it with the location owner. Unless Continental trashed a 47 thousand dollar jukebox... WTF ?

why would anyone expect quiet on the corner of st mark's and 3rd avenue? seems to be the perfect place for noise. unless noise = blight. no matter where it is?

I remember when this place was still the Continental Divide and seeing Sylvain Sylvain of the NY Dolls perform with his band there when the stage was just a tiny square in the right corner all the way in the back of the room. Over many years to follow I saw some great shows at that place. The stand-outs were Sea Monster, The Voodoo Dolls, Honky Toast, Space Hog (the fire department shut the show down because the place was packed), and The Remainz with Marky and Dee Dee Ramone. Joey showed up and did a couple of songs with them. CBGB got the lion share of attention but I was always partial to the Continental. I haven't been in there since they went bar only. On some level it would be a shame for it to go, but there's a ton of shame to go around these days with old places shutting down. It's really disgraceful that the EV can no longer hang on to it's very, very long standing traditions as a 'different'(for lack of a better word) place that your outsiders and misfits could turn to. Were talking a 50-60 year history at least. Those days are gone, gone, gone.

presumably it means they've been skimming the revenue from the jukebox. Over 7 years that's $7,000 a year, just over $500 a month. Not a lot of money to lose your bar over.

Saw several weeks of Don Cherry shows at the end of Continental Divide and just before Continental. Amazing shows, arranged by his daughter, IIRC, toward the end of some sort of rehab. For at least two of the shows, the audience was me and the bartender for the first set.

According to the Mayan Calendar, 2015 is the year the East Village comes to an end and a whole new world is born. I believe they named it "Midtown South."

I remember when it was the Continental Divide and it had a dinosaur motif. Fun times, loud bands (now partially deaf) and youth. What a combination!

People who move to noisy neighborhoods and then make noise complaints are a blight on the good people of the city. I don't know why anyone takes their nonsense seriously.

You won't be missed by many, and you'll likely soon be replaced by another get-shitfaced-for-cheap bar - because THAT is what this nabe is now about, unfortunately.

Gee anonymous 11:20 PM, if we could all be as insightful as you things would always remain the same. I only passed the bar (almost nightly), my thought was about the quality of life in the neighborhood (noise level). I can remember when the space was a local bar Seiden's and then Frieda's Disco Palace, and then briefly a Mongolian barbecue restaurant before becoming the Continental Divide / Continental. Just because bar which causes neighborhood problems isn't tucked away on a sidestreet, doesn't make it any less a problem for people living in neighborhood.

Don't remember Seiden's, but I remember Frieda's. Never went in, but my impression at the time was that Frieda's was a Bowery bar for gay/transvestite bums (sorry not politically correct, but that's my memory from the time). I was in high school at the time, probably 1973-74ish?

@11:20pm: I was living here BEFORE this area became "woo-woo" party-central - back in the old days when people wouldn't visit me because "it's too dangerous below 14th St."

Your comment presumes only new arrivals complain about noise, which is simply not true. You have no idea how many people have been living here for quite awhile (likely before you were born!).