CB3 shows support for a Community Gardens District; now will City Council do the same? 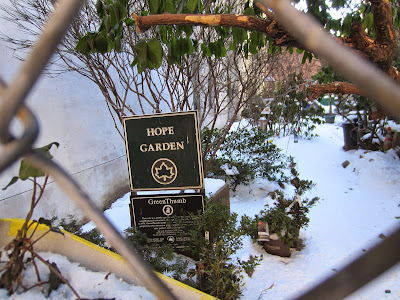 Via the EVG inbox yesterday morning…

If gardeners have their way, Community Board 3 (CB3) will soon be the recipient of a Community Gardens District that will include all 46 remaining community gardens located within its boundaries; a plan spearheaded by the Coalition to Establish a Community Gardens District. They aren’t talking about the manicured version associated with the New Orleans Garden District but, rather, the home grown, gritty version we all know and love that’s particular to everything East Village and Lower East Side!

On Thursday night, CB3 voted overwhelmingly in favor of establishing of this plan with a vote of 28 to 1.

The Coalition says community gardens have a deep rooted history in CB3 and the distinction of having the very first one in the City started in CB3 by resident and visionary environmentalist, Liz Christy, in 1973. Christy’s name is legendary in the national and international greening movement. She reclaimed and repurposed hundreds of vacant lots through her leadership and work with the Green Guerillas, which she co-founded and is the City’s oldest gardening organization, and the City’s Council on the Enviornment, which she founded and headed and is now known and branded as Grow NYC.

Once there were over 60 community gardeners in Community Board 3 but only 46 remain. Of those owned by the City, the Coalition says none are permanent or receive dedicated budgets to address infrastructure needs. Gardeners and their growing list of supporters, want CB3’s community gardens mapped and designated as park land — which would then take an act of the state legislature to be used for any other purpose; designated as a special district to acknowledge their unique and well-earned place in the City’s history; and management left in the hands of community based volunteers which has proven to be a successful model of operation for over 40 years.

The District plan will next go before City Council. You may still show your support for preserving community gardens by signing this petition.

Previously on EV Grieve:
Your chance to help create a Community Gardens District
Posted by Grieve at 10:39 AM

If these become park land will the public get access? or will they remain just for a small group of connected people?

Taking a little pride and manicuring some of these gardens isn't a bad idea. Quite a few of them look like dumps.

It's called volunteering. Try it sometime.

good stuff, something needs to be done before all of these lots are developed.

"If these become park land will the public get access? or will they remain just for a small group of connected people?"

The gardens have specific hours they are open to the public—usually on evenings and/or weekends, or as most of the signs on the gardens note, "whenever gardeners are present."

None of them have the budget to have them patrolled or guarded on a continuous basis, and if they were left open continuously, there is still the lingering fear some would end up being used as shooting galleries.

This is the off-season; in the coming few days, 10 inches of snow are forecast. When the weather is actually conducive to gardening, people are encouraged to go and hang out in the gardens—or even work to maintain them.

Agreed. A lot of these garden are mud patches. People shouldn't have to volunteer to motivate the people who run them to show some neighborhood pride.

2:07 nasty much? Perhaps it's your attitude keeping the volunteers away.

The garden on 11th just east of B is really nice. Bette Midlers organization worked with some volunteers and they did a fantastic job rehabbing it. It's open to the public.

The more the nabe gentrifies, the fewer volunteers appear in the spring. Of those who do, perhaps fewer actually understand gardening or community than in years past.

Having said that, there are still people who are willing to share their knowledge and the more people who volunteer, the more open hours that could be covered, more projects planned, funds raised, bulbs planted, weeds pulled, community events held, trick or treats sponsored, etc...

If you think the gardens are mud patches, imagine them as condos.
Talk about no access for the community...

Our garden is open to the public whenever there is a garden member present, which is often on summer weekends. It's disappointing how few new members we get interested in becoming part of the community, getting to know your neighbors. Very many come in to enjoy the flowers, read, chat with each other, eat lunch, but hardly any come to a meeting or come back enough to become an active member. It's not a lot of work to volunteer, and it's fun, and after a while you get a key so you can also open the gate, so there will be more hours for everyone to enjoy.

I asked the question because I don't see these gardens open and if tax dollars are going to be spent they should be open to the public. The gardeners I encountered weren't exactly the most welcoming either. Sorry that I actually want to get involved in the neighborhood- meet the long time locals- and help in the garden. And no I don't know anything about it but I can learn and help. Just seems like they are for a small group who control the access and hours- and then complain about a lack of public support.

We have one of these "gardens" on our block that is permanently shut, covered in razor wire, and is only "open" to the many rats who come and go at night. Nobody shovels the snow in front of it and people discard mattresses and furniture in front of it. I dunno. I don't think it helps the neighborhood in any way. It helps the rats, though!

How will tax dollars be spent on making a community garden district? Actually, taxes will be spent if they become parks, but not if they stay gardens. The gardens are supported by member dues and fundraisers. I hope you will keep trying at your garden, give them a chance to warm up to you. I'm sure they would love another person to help out so the garden can have longer hours open.

So if you have a plot that isn't being tended,how about taking action and improving it? Give back, make an effort. As noted, it's been harder and harder to attract new people because the majority of this neighborhood has become transient, people who don't care because they aren't going to stay. If you are here, and really do live here, and you want nice things, then be the person who fixes it instead of complains about it. The gardens didn't spontaneously appear, they are the product of people who live here's very hard work. Most of them are gorgeous spots, a relief from the relentless grind. As they say, if you aren't part of the solution the you are part of he problem.

If you think the gardens are mud patches, imagine them as low income housing.
Talk about access for the community...

The garden in question in the photo is practically "owned" by some rude residents who use if for their own private purposes, without allowing the public in. Of course, it's a dump, so while I'd love to be involved, there's no easy way when the "keyholders" are only interested in using it for drinking and getting high.

Gardens won't get tax dollars if this measure passes, it will only preserve them from being auctioned off and then built on in the future.

Yep here come juice bar trust fund owners and ivy educated food coop owners to make a profit off land ostensibly in the name of "community" poverty pimping or collectivism as rand put it at its best with parks dept politicians fighting tooth and nail to get monies without spending a lick in trimming trees. number one waste of money on city's independent commission on budget waste central park conservancy . Members of st Nicholas preservation and other non profits helping inner cities double as vps at deutschr bank and get 150000 salary benefit packages these are great organizations just kick out rich opportunist sneaking in sadly I dint.know how to do that opportunist like judas always prevail