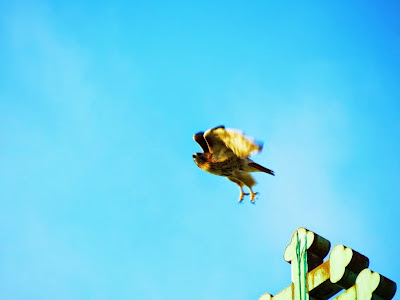 An EVG reader writes in:

Christo and Dora seem to be back in nest mode. The past day or so they've been carrying sticks and such to shore up the nest (same one as last year, on top of the A/C unit). This morning they were both hanging out in the nest.

It is true. The red-tailed hawk parents are rebuilding their nest that netted three offspring last year on the Christodora House on Avenue B and East Ninth Street ... (someone removed the remains of the old nest in November.) 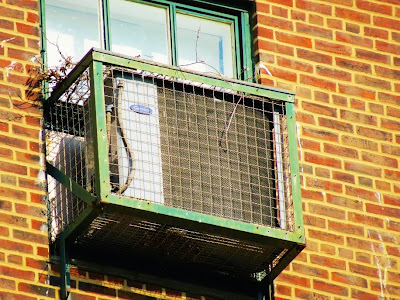 They've both been hanging around the nest area, so it's good to know they're back at it. Interesting that Dora is helping out. She did all the supervising last year, while Christo would cut the sticks, then get her approval before taking them over to the nest. She didn't like one of his choices and kicked it out of the tree when he presented it to her.

To be continued for sure. And visit Gog in NYC for all the off-season hawk activities here.

And now a flashback... a time-lapse video of the hawk kids via East Village resident and photographer Francois Portmann ...

VIDEO: Watch the baby hawks of Tompkins Square Park dine on some rat
Posted by Grieve at 5:10 AM

we have been having a warmer winter so far. it makes sense that the rthawks will start nest building sooner.

You smile now, 9:43 AM, but just wait until they build a bar on one side of that nest and start having all-night ravers, with fragmentary rat and pigeon carcasses raining down on unsuspecting passersby on Avenue B, followed by some hawk projectile vomiting and fiendish laughter!

The best thing about this experience is the neighborhood involvement. How fun it was last year to meet neighbors on the street and enjoy these wild birds going about their business right in front of us. They are a neighborhood treasure.

And a lot of it thanks to you, G. Thanks for all the great photos.

Did the baby hawks hatch?

The hawk nest hosts have set up a web camera where you can see the babies: