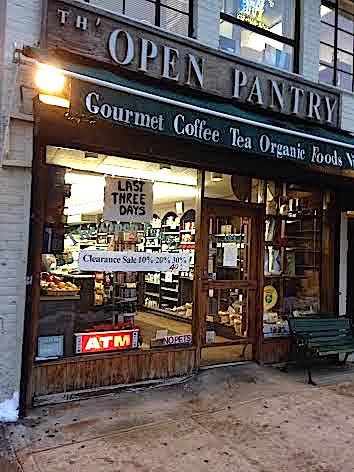 The countdown to closure continues at Open Pantry, the 45-year-old coffee shop/grocery at 184 Second Ave. The shop between East 11th Street and East 12th Street closes after business hours tomorrow.

As we first reported on Jan. 8, continued competition from the nearby Starbucks (Second Avenue and East Ninth Street, First Avenue and East 13th Street) as well as the new Westside Market apparently put a damper on sales.

Several readers have said that the proprietors, the Pappas family, also own the building here.

Meanwhile, store items have been marked off up to 40 percent.

And per the sign on the door: "Our family would like to thank the neighborhood and all our customers for their loyalty and continued support throughout the years."

Open Pantry is now selling off its inventory and equipment
Posted by Grieve at 5:07 AM

Still cannot believe that they are closing.

The Pappas' family is gunna make a killing in renting out the space. Hopfully another froyo shop.

Good folks down there. I am really going to miss the bench out front and the rag-tag crew who hung out there. Spent a lot of early summer mornings sitting out front on that bench with my newborn son, drinking coffee and watching the city wake up while mom slept. Good folks. Good bench. Good memories.

OPEN PANTRY EMPLOYEES: If anyone needs work please come to Tompkins Square Bagels at 165 Avenue A. We may be able to help.

Just heard that the Met Supermarket on Third Ave. between 16th and 17th will be closing in April due to new rent demand. It will be a real loss for the neighborhood. They are all very nice people and the store is a real asset to have nearby.

I live on 19th off 3rd and I have to say, that Met is a dive. Always walk the few extra blocks to the Dag on 23rd and 2nd Ave or the new WestEnd Market. If they took care of the place a little better, maybe they'd have been able to afford the increase.

Anon. @3:43 has a point, namely that this Met isn't the shiniest apple on the cart. When pressed, however, they did bump up their produce game. That was a clear response to Trader Joe's, Whole Foods, and even the health food market on the corner of 16th Street.

But it wasn't enough. Their space isn't meant to house a 21st-century grocery store: low ceilings, three or four registers, exceedingly narrow aisles, and White Rose this and that. It's low-end, low-margin merchandise inside a marginal space, staffed by people who give off an unmistakable vibe of indifference (and I'd probably do no better after a spell working there, bless them).

The sad part is regular shoppers probably rely on it for location and cheaper necessities. Whenever I go in, I invariably see older folks and others who don't appear to have a lot of disposable cash. Coincidentally, the Duane Reade a block north has yet to undergo renovation --- it's still an "old" DR. So I wonder more about the economics of Third Avenue. There are a couple independent and excellent restaurants around 16th and 17th, and no shortage of foot traffic.

Still, the grocery business has notoriously thin margins and much competition; I'm surprised this Met lasted as long as it did.

[btw, if you're still reading, a shout-out here to the proprietor of this blog for the information and upkeep. Thank you!]

I just want to say that the health food store on 3rd/16th (Natural Green Market) is my favorite grocery in the whole damn city. It's *amazing* how much they manage to stock in their store, including bulk foods, a salad bar, produce, a juice bar, natural beauty products, and the now-all-but disappeared fresh-cut flowers. I wish they could expand and take over the Met space.

I was in Open Pantry the last day and the guys said one of the employees, Thomas, already got a new job at the Westside Market on 3rd and 12th. I hope everyone else finds employment, too.