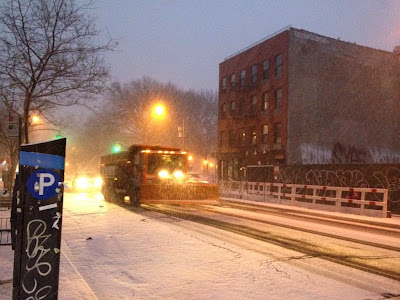 [Avenue A the other morning]

Because snow has been a topic of conversation this week... From the EVG inbox...

Light snow and heavy snow seasons are significantly more expensive than average snow seasons on a cost-per-inch basis, according to a new analysis released today by New York City Comptroller Scott M. Stringer. Since the winter of 2003, the cost of clearing New York City streets of snow and ice has averaged $1.8 million per inch, but that amount has varied considerably on a year-to-year basis.

“Snow removal costs the City millions of dollars annually, but it turns out that average winters give us the best bang for the buck on that front,” Comptroller Stringer said. “The total amount that the City pays to plow our streets grows with each storm, but counterintuitively, it’s a lot more expensive per inch when we get a little, or a lot, of snow in a season. Consider the old adage of $1 million per inch debunked.”

Find a PDF of Stringer's report here.
Posted by Grieve at 12:07 PM