Ess-a-Bagel is moving down the block 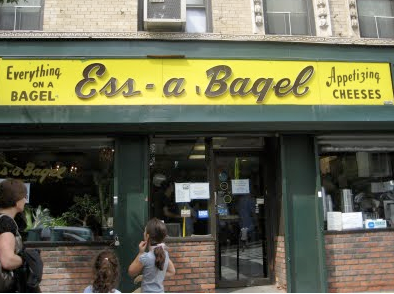 News broke on Friday via the Town & Village Blog that Ess-a-Bagel was being forced out of its longtime home on First Avenue at East 21st Street. The 39-year-old bagel favorite apparently did not get its lease renewed.

However, according to a statement that the landlord's reps sent us: "Ess-A-Bagel’s owners repeatedly refused to meet us between their below-market rent and current market value."

In any event, it appears that Ess-a-Bagel already has a new space lined up ... based on this tweet sent Saturday...

A tipster with knowledge of the situation here also told us about the move.

The landlord, L&M Development Partners, reportedly already has a Bank of America and Tower Bagels fitted for the current Ess-a-Bagel space.

As for Ess-a-Bagel's new space, perhaps it will be the former home of The Frenchmen.

Gothamist notes that the Ess-A-Bagel owners have yet to sign the lease at the new location.

Previously on EV Grieve:
[Updated] Report: Landlord forcing Ess-a-Bagel from its longtime home (46 comments)
Posted by Grieve at 5:00 AM

I have a hard time with using "forced out" to describe what's happening here. It sounds like the property owner was trying to work with Ess-a-Bagel, even offering below-market rent (essentially money taken from his own pocket!) to entice them to stay. It's the landlords right to raise the rent, just as it's Ess-a-Bagel's right to say no and find a more suitable situation. Sounds like that's exactly what happened - good for everyone involved.

I know that seems a reasonable assessment based on the landlord's claim, but then why were the other two restaurants in the building forced out at the exact same time, also without a renewal lease offered? One of them is already permanently closed. Clearly the landlord is making a move here.

BTW, it might take quite a while for Ess-A to complete the permit and renovation process. It would be gracious of the present landlord to give them an extension while they work on their move.

I have no inside knowledge of this situation whatsoever, but it could be that the landlord decided to work with Ess-A-Bagel but not with the other two businesses. It could be that the landlord believes that Ess-a-Bagel is a more viable/stable businesses than the others (it sounds like one of the new businesses going into the space is a bagel shop). It's in the landlord's best interest to have tenants that are stable and can pay their rent! Or the landlord could have some sort of emotional attachment to Ess-a-Bagel that he/she doesn't have with the other tenants (sounds like that's what's behind the cookbook shop's successful move).

I do find the whole situation frustrating. I understand and support property owners' right to maximize the returns on their investments, but it sucks that the "best" tenant in many cases are national chains. I think the cycle will correct itself, but it will be at the expense of the character of the EV. When the EV becomes completely homogenized, rents will come down as people leave for other neighborhoods with more character. I for one am not paying market-rate EV rent to live in close proximity to Duane Reade and 7-11.

This landlord is not known for assisting or keeping small businesses in the retail space they run. Currently, their portfolio is a bunch of Metro PC's and other nasty chain stores. Let's not forget this is the same person who created the Moelis Institute for Affordable Housing at NYU. bahahahahaha

If it moves south, i.e. closer to the EV, that can only be a good thing. And they better keep their original sign!

Maybe it's time for NYC to even the playing field a little when it comes time for landlords and small biz commercial tenants to renew leases. How much is too much income going towards rent, instead of towards wages or profits from actual productive activity? Especially as more and more L&M's gobble up more and more NYC, entrenching their monopoly status and driving rents even higher. We're already at the point when wages are no longer an adequate source of income for most NYers.

And I'm really really happy that Ess-A-Bagel's gonna stay on First Ave near it's old location. It'll probably kill Tal, bagels that are apparently only *acceptable* from what I hear.

And David bagels? Like a lot of people, I've never tried them and never will. Those David guys worked at Ess-A-Bagel, learned their trade there, and then opened up their own location a couple of doors away. Open in another neighborhood - good for you! Opening a couple of doors away is just some rude shit.

Ess-A-Bagel is a neighborhood institution, and those of us in the neighborhood think their bagels are the best--they're big, they're chewy, they're New York. The stretch of First Avenue between 14th and 23rd Streets has at least 5 banks. What we need are the small businesses that give our neighborhood flavor--poppy seed, sesame, and everything. L+M Partners cast themselves as good guys (check their site), but are there really any good guys in real estate? They are scarcer than hen's teeth, as the saying goes.

Sure, but who gets to decide these things? We can't just arbitrarily limit rents - that is literally taking money out of property owners' pockets, whether the property owner is a big developer/landlord or an individual business owner who owns his own building and hopes to sell it in the future (like the DiRobertis or the folks who own the coffee store on 2nd ave, or any number of people who own their own apartments/coops). The problem is not easy to solve at all!

Don't get me wrong, I think real estate is a horrible racket. I just don't see anything stopping the homogenization of the EV except for the homogenization itself. I don't know anybody (myself included) who is willing to pay EV-market-rate prices (which reflect the uniqueness and desirability of the neighborhood) for the ambiance of the UES. If I wanted to live near 1248784 Duane Reades I would do so in the UES or Battery Park or something for 75% of what I pay in the EV. If things get much worse, people are going to vote with their wallets (and leases)!

On a related matter, and no disrespect to Chris over at Tompkins Square Bagels who runs a solid business, but the EV needs another bagel place.

Bagels are too ethnic and an offense to the middle-American transplants and their sensibilities; unless the bagels are black-seeded from Montreal or labeled Brooklyn and cost $4+.

we love you Essa bagels. We love your staff too. Hoping you're around for another 50 years.

who gets to decide these things

There is a bill before the City Council that would put landlord and small business in mediation when they can't come to a successful lease re-negotiation. And if that doesn't work, it would go to arbitration.

Unfortunately successive versions of that bill have been bottled up in committee for almost 40 years because the real estate industry has enormous political clout. That's why, as you put it, the problem is "so difficult to solve."

The main problem with limiting commercial rents is twofold. Firstly there's no one size fits all solution and secondly it doesn't address the main culprit which is the property tax assessment system in NYC. NYC gets a bulk of it's tax revenue for services (schools, cops, fire, health care subsidies, etc.) from prop taxes. NYC has a vested interest in raising assessments every year so they can maintain/increase their budgets. This trickles down to higher rents for everyone, so unless people of NYC are willing to do more with less the system will not change. NYC values your building more and more every year so they can basically have a stealth tax increase every year it drives up the cost of everything. That's also why oligarchs park their money in NYC real estate. They know the value of their property is guaranteed to go up every year and it's the closest thing to a fixed game for them

Ken - let's say your plan works. The city loses say 20% of its revenue. You ok with major reductions to all services or monster tax hikes? But its always someone elses money so who cares right?

The city can manipulate the rate, assessment, and valuations that determine the amount of tax revenue brought in. But it's really up to Cuomo and the state legislature to fix the f*cked up property tax in NYC.

Cuomo will continue overtaxing commercial property so that homeowners upstate owners can get a break and some 30% of the rent from my apt that I can't deduct from my fereral income taxes will continue to go to the city as long as just over 70% of NYCers give him an over 70% favorability rating. Unbelievable I say, except that we also gave Bloomberg 3 terms. Schmucks.

All that grief, for nothing??? SCREW EVERYONE.

...and still there is hope for this city!

There had to be a point at which quality of life trumps "maximizing revenue". We already do that...it's called zoning, limiting buildings in various ways.

And make no mistake: the fabric of our city is being ripped apart and once that's done won't easily return. What's being lost is lost, we see it happening, and there's no excuse but greed and bad policy/management.