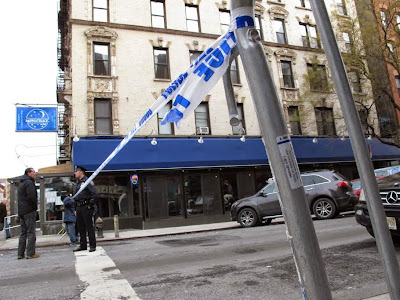 Multiple readers have told us that East Fifth Street between First Avenue and Second Avenue has been closed since this morning. Only residents are allowed onto the block.

Word on the street is that there was some kind of threat made against the 9th Precinct, which sits mid-block.

That'a all we've heard at the moment.

The NYPD and other police departments in the United States and elsewhere have reportedly been on alert since an ISIS threat from last September recently resurfaced. 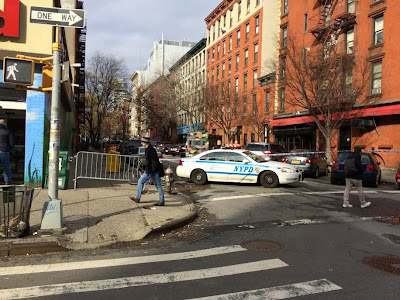 Huh. I live on east 6th (between 1st and 2nd) and the 9th precinct is basically in my backyard (I can actually see detectives walking around inside through the windows). I'll keep on the look out for anything weird.

NYPD patrol car had E21 St blocked off in front of the 13th Pct. around noon today.

Someone is going to take away the "hero" tag if they keep hiding like this.

NYPD seem more concerned with their own safety than actually doing the job they are paid (handsomely) to do.

More seriously - is there some official process by which NYPD can just take over public streets? When they monopolized 4th Ave for over a month over the holidays it was impossible to get any info on what they were doing and for how long. Any senior officers asked were rude and dismissive. They even stopped Fedex, UPS, fresh direct, and contractors from delivering to our building. 311 was useless.

Weird. The threat must have been over by 5pm when I walked by.

There were a bunch of cops searching the 2 community gardens between ave B and C and 5th and 6th street yesterday in the afternoon. Was a rather strange sight.

Are we to believe that ISIS, all the way on the other side of the planet, made some sort of "threat" against the 9th Precinct? Of what strategic or propagandic (is that a word?) significance is the 9th Precinct to them????

Someone must be pulling someone's leg here....