Hey, the MTA upped the cost to ride subways and buses today 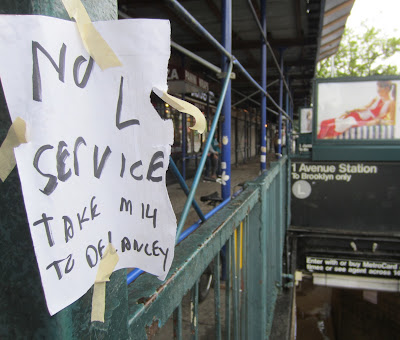 The new fares, which will take effect on March 22, were part of a package of increases approved for the system’s trains, buses, tunnels and bridges.

Read the whole article here.
Posted by Grieve at 7:11 PM

But the MTA has the funds for a campaign about "manspreading"?

Yea they do. Wish they'd get the smelly disgusting bums off the platforms and the E train. You know they only mop the floors and don't clean the benches. Gross. Lice and bedbugs and feces. Wonderful

So we have to pay more for a system that's has a lot of delays, bums sleeping in the trains, constructions at times of day that do not make sense. Malfunctions and over packed during rush hours. Lovely.

The poor just got 50 cents poorer each day.

on the sunny side, the bonus has been increased - put 25 bucks o the card, get a free ride!

Cuomo and the MTA think subway/bus/ train riders are gonna come up with the $15 B to cover the shortfall for infrastructure? Sorry but public transit is the lifeblood of the region. Look somewhere else for funding.

Riders still don't pay the cost of their trips. Institute zonal fares, increase the cost further. Once this happens and the MTA has some money, maybe the service will improve. Also, why did people vote down Bloomberg's cordon pricing for cars entering Manhattan? The MTA would be flush with cash right now if that was employed and car trips could subsidize transit riders.

But if you don't use the subway or only take it two stops in Manhattan, you should not have to subsidize the people riding from Brighton Beach or the boonies in the Bronx. We pay enough taxes.

Bronx and Brighton Beach are all the same city New York City. They should pay the same. Its another way to put the cost on the poor, too. And why should we pay another tax to cross a bridge for which we've already paid. Its really about getting the surveillance state in place to the State can know the owner of every car and that person's movements, and no I'm not paranoid these are the facts.

If you live in public housing, or have an account at the LESPFCU, an annual Citibike membership is less than the cost of a one-month Metrocard.

Raise taxes on the rich instead of the poor. Is that really so hard?

Ny state has some of the highest taxes already. How do other states survive? Why does ny spend more on medicaid than fl and pa combined? Deal with the fraud and corruption. Raise taxes. Knee jerk nyc liberal response. Make someone else pay because I am somehow entitled. How does seattle survive without city or state income taxes?

I'm sure Sheldon Silver and his ilk are responsible for the mta being a mess. o connection there right? Just give them more money.

Yes this is a great bike weekend. Biking to work doesn't work for most. Sorry.

Yeah you can't bike every single day but doesn't mean you should just give up completely and bend over. I got a bike a few years ago and now I only pay for MTA when there is no other reasonable option. I have reduced my MTA expenses by about 3/4's and it feels fanfuckingtastic.

Depends where you work and your age medical status.

"But if you don't use the subway or only take it two stops in Manhattan, you should not have to subsidize the people riding from Brighton Beach or the boonies in the Bronx. We pay enough taxes."

Look at it this way, people that live that far from Manhattan can not afford to live here, they tend to have low income jobs and are important in helping the city run such as service jobs which we ALL benefit from. If you think I'm wrong and believe they make a good living working in the city but like living in the outer boroughs for the lower rent then would you prefer they all took their cars into the city each day? We all get better air quality, less noise, traffic when people use the subway.

As a teenager, I never had extra dough for corporate pigs, So I learner the "spin the turnstyle backwards" trick. If you are slick, its actually much cheaper to get caught once in a while and fined $100

10:34 those are not just mail-in tickets like a traffic ticket. At the time of issuance, the police will often detain you at a transit police station while they process your ID, and run a full warrant check. This can take several hours. If you don't have proper ID on you, double that. If you do happen to have a warrant, like for not paying your previous ticket, you will be arrested and processed thru central booking, then wait to appear before a judge who will either set a low bail or zero bail, and you will then be processed for release. This can take 48 hours if you happen to get tagged on a busy weekend. Then you will have to appear in court in any case for your ticket, not just mail it in, so that is another day shot, maybe 4 hours if you get there real early, longer if you are less prompt.

So it's not quite the take your chances on the $100 that you portray. It's a real hassle to save a couple bucks. Not that I've never done it, but be aware.

I know someone who got a day of community service - cleaning up in central park - when he went to court. It was a huge hassle. Be careful if you're not paying - especially in busy manhattan stations