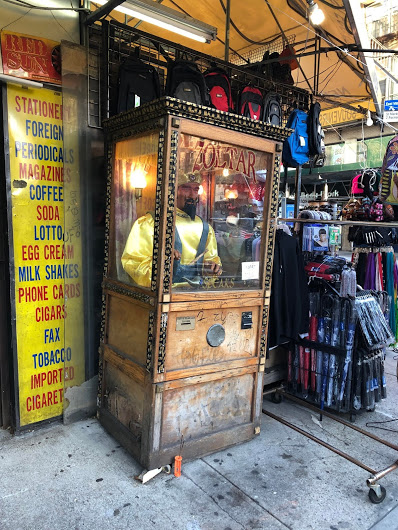 In late May, Zoltar — everyone's favorite Animatronic Fortune Telling Machine — was removed from its post of nearly seven years outside Gem Spa on Second Avenue at St. Mark's Place.

Unfortunately, as you may have sensed by now, this Zoltar will NOT be returning. The official word from Gem Spa: "The Zoltar machine was removed by its owner due to our scaled-back hours to prevent vandalism."

Turns out that this Zoltar remains in the five boroughs. We've had several reports of sightings of Zoltar in... Bushwick, specifically on Myrtle and Central Avenue. The photo below is from EV resident Grant showing Zoltar ready to ply his wisdom trade outside OMG Pizza ... 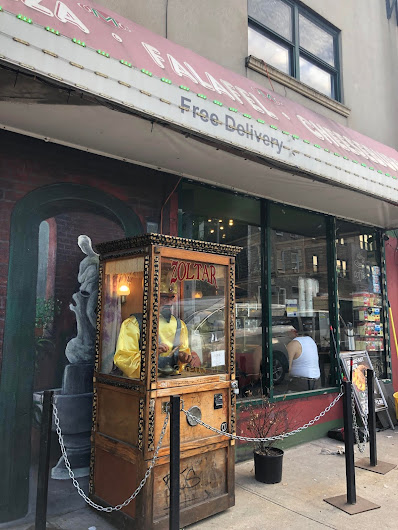 ... and for further documentation...

Apparently the Zoltar that once sat outside of Gem Spa in the East Village is now sitting outside of the meh pizza joint at the end of my block. #zoltarinbushwick #gemspa #fortunetelller #Bushwick #Brooklyn #bushwickgrillclub

We did compare the graffiti markings on the Gem Spa and the Bushwick Zoltar and can confirm the two are one in the same. While a move to Bushwick seems a little, oh, 2014, we hope that Zoltar is happy and can win over the new neighbors.

I always knew that somewhere deep down, Zoltar was actually a hipster.

Gem Spa (did you know it was actually Gems Spa way back in the 60's?) seems to be cleaning out or cleaning up little by little. The very thought of seeing Gem(s) Spa disappear from this corner is distressing. Perhaps we will see what is going on soon.

Gem Spa has stopped selling newspapers and magazines. Depressing! I used to rely on them to get the Sunday Times on Saturday night.

The End is near.