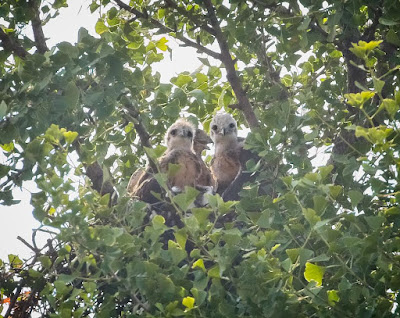 [Photo from July 3 by Goggla]

Early testing showed anemia and exposure to rodenticide. The hawk was in the care of the Wildlife in Need of Rescue and Rehabilitation Inc. (WINORR) the past few days. 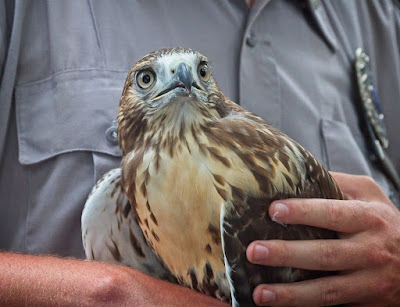 [T]his is so gut wrenching. I've put all my efforts and energy into trying to fix the selfishness and ignorance of the human race. This beautiful young soul will never sore high up in the clouds bringing the caring people joy and happiness of watching his magnificence. He never got the chance to live his life. Instead he suffered a horrible death. How hard is it to clean up after yourselves and take pride in our planet and all that live in it???

Secondary poisoning happens when one animal (like a rat) eats poison, then the predator who eats the prey animal dies from the poison. Our hawk likely ingested rodenticide from a poisoned rat or mouse that was brought into the park by its parents. Tompkins Square Park does not use rodenticide, but the surrounding area is full of it.

She also links to Raptors Are The Solution (RATS), an organization dedicated to educating people about the dangers of rodenticide.

Amelia's eggs arrived in late April. We got our first look at the chicks in early June.
Posted by Grieve at 5:00 AM

Related story. I had mice in a walk up apt in the West Village. I bought some poison available at the local drug store. Put poison in hole in floor. Within 24 hours hear very high pitched squeeking in the walls for days of the mouse or mice in pain dying from the poison. Then the smell of rotting mouse flesh for days. Never used again. Used the slap traps that kill instantly and more humanely. Stop feeding the pigeons and squirrels, and dispose of all your trash in a way that vermin can'take access it.

Heartbreaking. So sorry for your loss, little one, hope you are wheeling across the celestial sky the way you never got to on Earth.

There is no good reason to use rodenticide, which kills a lot more than rats and is ultimately ineffective. The problem is PEOPLE not taking care of their environment. This in itself is a whole other topic of discussion, but focus should be on rat prevention: taking care of garbage, plugging up holes in buildings and sidewalks, filling in rat burrows. City parks and some community gardens are now using CO2 in rat burrows, which I think is very effective and more humane than using horrid anticoagulants.

Rats need three things to thrive: food, shelter and water. Take away one or more of those things and they can't live. As it is, we are providing them with all three of those things, then dumping poison into the environment rather than changing our ways.

Raptors Are The Solution (RATS) is a great organization and I highly recommend checking out their site.

This is so sickeningly sad. It barely had left the nest.

I'm sure everyone here has seen trash piled high on top of the solar compactors in the park; I hate humans that are too [expletive] lazy to take their trash home to recycle—or at least walk it to a place they can dispose of it effectively.

Here is the link to: Raptors Are The Solution. Check it out, and share the link; it's a great site!

@Donnie
"Stop feeding the pigeons and squirrels, and dispose of all your trash"
Unfortunately, this is a mental health issue. And a particularly prevalent one in this neighborhood.
Is what it is.