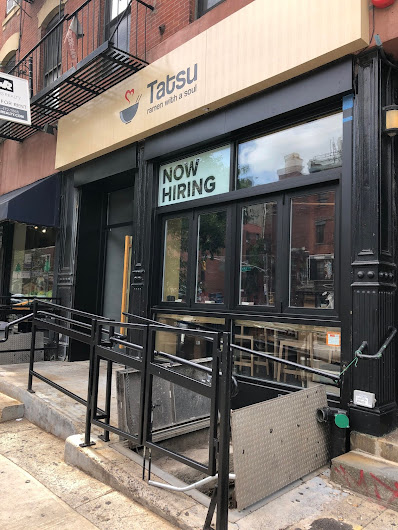 For now, Tatsu will be opening in the evening hours...

Mark your calendar, our doors open today, 07/24! We’ll be satisfying your dinner and late-night ramen cravings with our temporary limited hours: Sun-Wed: 6PM-2AM Thurs-Sat: 7PM-3AM · Stay tuned for our 11AM opening time in the near future: Sun-Wed: 11AM-2AM Thurs-Sat: 11AM-3AM · Until then, #LateNightsAtTatsu #SlurpOn #✌️ · 🍜 📸: @sgmphoto

The last tenant in this space between 10th Street and 11th Street was Ashiya Sushi, who moved away in 2015.

Being neither an A-lister, a hipster, nor a blacklister (whatever that may signify), I wonder if I will be welcome. It seems pointless to comment on the inflated language of self-promotion. The interior looks sleek and follows a modernist ethos. The proof of whether this restaurant will last more than a couple of months or a year or two will be the quality of the food, the quality of the service, and whether the effort they will make in the opening weeks and months can remain a continuing high standard. Good luck to them.

Based on the breathless descriptions, I don't think this place is actually meant to appeal to anyone over 26-27 years old. Props though, for a bunch of college kids managing to open a restaurant.