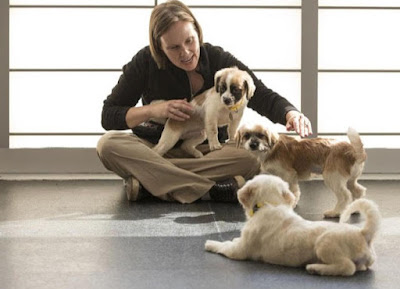 The Post reports today that at least half of the puppies have been adopted, and the rest are in good care.

“ASPCA Animal Hospital and Adoption Center staff have worked diligently over the last two weeks to provide each dog with the medical attention and socialization they needed,” said Howard Lawrence, vice president of ASPCA’s Human Law Enforcement, in a statement to The Post. “We’re pleased that nearly half of the dogs have already been placed in loving homes.”

The resident, named as 57-year-old Ivan Paredes, was charged with torturing, injuring and/or not feeding an animal and neglect of an impounded animal, according to the Post.

Tenants have claimed that NYCHA officials ignored their complaints about the mistreated puppies for months.
Posted by Grieve at 11:16 AM

This is horrifying. Good for the neighbors who spoke up. Let us know if those of us in the neighborhood can help get this man out of NYCHA housing. He doesn't deserve to have an apartment if he is using it as a space to torture animals.