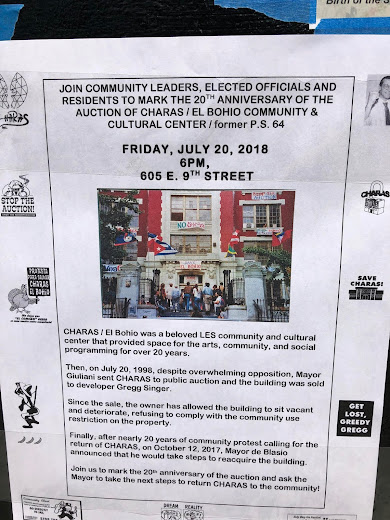 Developer Gregg Singer bought the former P.S 64 and CHARAS/El Bohio community center property from the city during an auction in 1998.

And tomorrow marks the 20th anniversary of the sale of the building at 605 E. Ninth St. Avenue B and Avenue C.

And as these flyers posted around the neighborhood show, a group of unspecified community leaders, elected officials and residents will mark the occasion outside the Ninth Street entrance tomorrow evening at 6.

Per the flyer: "Join us to mark the 20th anniversary of the auction and ask the Mayor to take the next steps to return CHARAS to the community."

Singer wants to turn the landmarked property into a dorm called University Square, which continues in a holding pattern while the DOB maintains a Stop Work Order on the building.

You can read the previous post for more background on the ongoing P.S. 64 drama.
Posted by Grieve at 4:30 AM