East Village Fruit and Vegetable is closing on Avenue B 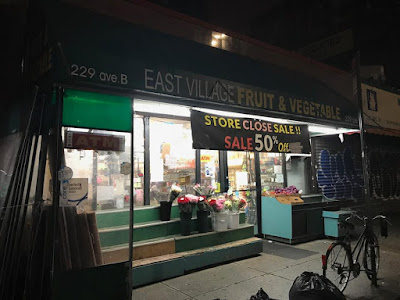 Several EVG readers have shared the news that East Village Fruit and Vegetable is closing at the end of the month here on Avenue B between 13th Street and 14th Street.

The lease is up, and the owners can't make the increase in rent work. According to a longtime patron, the store owners also said that they don't think they can compete with the new Target, which features a large grocery selection, on 14th Street at Avenue A.

An EVG reader had this to say about East Village Fruit and Vegetable:

It's the kind of place where you could leave keys for a friend to pick up, catch a glimpse of Deborah Harry buying fruit [when recording at Mercy Sound Studios on 14th Street] or pick up milk on the way home from a night out. Friends and I wonder how long that single-level structure is likely to exist, given the income potential of building up.

For now, the store is having a 50-percent off sale on selected items. 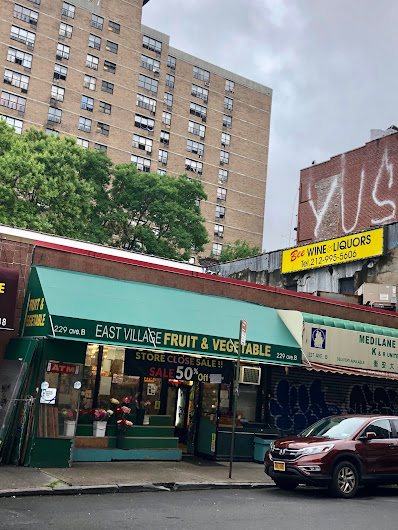 Oh, this really sucks. Homemade kim chi, cilantro with the roots on, reasonably priced produce. I pick such things up every time I walk by there, for how many years now? This is a stinking loss.

This is sorry news. I wish well to everyone who works there, in their next steps.

That new Target, and that entire block, looks like nothing related remotely to the East Village or NYC or anywhere that has any personality, even with Target's grotesque indoor "graffiti" mural with "Nuyorican" printed across it (the Nuyorican Cafe should sue their ass for appropriation). That stretch of 14th is now one of the blandest cityscapes I've ever seen, and would do injustice to any city or town or village or industrial park or mall.