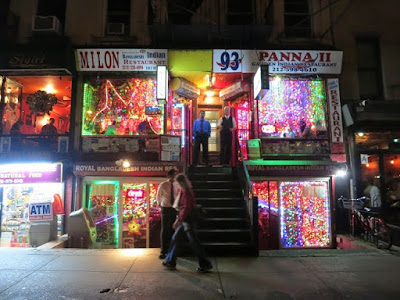 The Real Deal explores the world of "ALT2"s at the Department of Buildings. As they note, these are "alterations which do not affect the 'use, egress, or occupancy' of a building and are therefore considered relatively minor."

While the majority of such jobs can be completed within a year, before the first permit expires, altering buildings can often become a complicated task due a variety of complicating factors – as an analysis by The Real Deal discovered, hundreds of ALT2 permits throughout the city have had to be renewed more than 10 times.

According TRD's research, the oldest active permit on record was first filed in June 1994 — for a "temporary canopy structure in yard" at the Royal Bangladesh Indian Restaurant at 93 First Ave. between Fifth Street and Sixth Street.

The work has been approved, though that temp canopy still awaits: City records show that the permit was renewed in May — for the 23rd time.
Posted by Grieve at 4:00 AM

Email ThisBlogThis!Share to TwitterShare to FacebookShare to Pinterest
Labels: Department of Efficiency, DOB