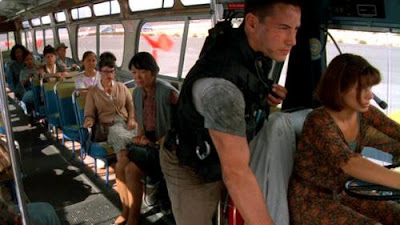 The city and MTA have decided to get an early start on converting 14th Street into a bus-only corridor ... beginning on Jan. 6 — three-plus months ahead of L-mageddon time.

City officials said that they need the extra months to test M14 SBS service and make adjustments before the shutdown begins.

amNY first had the story:

To ensure buses are up to the task of absorbing some of that crowd, the city and MTA plan to institute bus-only restrictions on 14th Street between 5 a.m. and 10 p.m., seven days a week. The restrictions will be in place between Ninth and Third avenues eastbound, and Third and Eighth avenues westbound. A DOT spokeswoman said the city is hashing out “specific access points” for local traffic and trucks.

The SBS route will initially make five stops between First Avenue and Tenth Avenue. The SBS route will complement existing M14A and M14D service so that buses will arrive every two minutes during morning and evening rush hours. Combined, the local and SBS service is expected to handle about 84,000 riders per day.

The shutdown of the L — between Bedford Avenue and Eighth Avenue to repair the Sandy-damaged Canarsie Tunnel — is expected to last 15 months.

Previously on EV Grieve:
Cars to give way to a bus-only corridor most hours on 14th Street during the L-train shutdown
Posted by Grieve at 4:00 AM

I am very pleasantly surprised to see a long ago friend from the 1980's lower east side Natsuko Ohama. A wonderful and very talented woman.

I miss and prefer a lot of 1970s and 80s lower east siders.
Just an old guy's memories being expressed.
The future is young people, wish they would carry on the best of old LES.

A bus every 2 minutes on 14th St? Good luck with that!

The other day (at 5:10pm - definitely rush hour) I & a lot of other people waited nearly TEN minutes for ANY eastbound 14th Street bus at 8th Ave/14th Street.

Bus service in NYC in general is abysmal, but 14th Street service deserves a negative award, for "trying to be worst."

LOL @ the video still of Speed.

The ultimate goal of all this is to turn big swaths of the city- including 14th St- into pedestrian only thoroughfares like some of the fkkked up Bloomerberg congested intersections in midtown. Where does it all begin?
Its part of the UN Sustainable Cities Initiative where we are all stacked like sardines into 150' coffin-apts w/ streamlined walkways, bikeways and herded like cattle. This bus shutdown is part of an unannounced pilot project of a much bigger effort that those sneaky globalists havent told us about, but will spring it on us as 'permanent' at the optimum time.